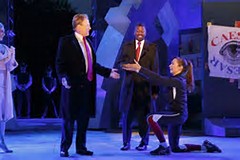 Delta Airlines and Bank of America pulled out of their sponsorship of New York’s Public Theater on Sunday over a production of “Julius Caesar” that reimagines the main character as President Trump.

Shortly after Delta, who was a four-year sponsor, made its announcement, Bank of America yanked its support as well.

The Shakespeare in the Park play tells the story of the leader assassinated by Roman senators over the fear that he’s becoming too tyrannical, but rather than the original setting, the production stages Caesar (Gregg Henry) and his wife, Calpurnia, (Tina Benko) with Donald and Melania Trump lookalikes.

Henry, who already played a Trump stand-in on “Scandal” last year, models his Caesar almost perfectly after the man in the Oval Office. He meets his end after being stabbed to death by women and minorities on stage.
Delta, Bank of America hypocrites over ‘Julius Caesar’ Trump

Benko, similarly, plays Calpurnia with a thick Slavic accent, much like Melania herself.

The recreation has drawn ire from those who say the show promotes violence against the President. Those critics include the President’s son, Donald Trump Jr.

“I wonder how much of this ‘art’ is funded by taxpayers? Serious question, when does ‘art’ become political speech & does that change things?” the younger Trump tweeted Sunday in response to a Fox News article that accused the show of depicting the assassination of the President.

Delta, which donates between $100,000 and $499,000 annually, according to Deadline, pulled its sponsorship Sunday afternoon.

Trump meets bloody end in risqué ‘Julius Caesar’ reimagining
“No matter what your political stance may be, the graphic staging of Julius Caesar at this summer’s Free Shakespeare in the Park does not reflect Delta Air Lines’ values,” a company spokesman said in a statement.

“Their artistic and creative direction crossed the line on the standards of good taste. We have notified them of our decision to end our sponsorship as the official airline of The Public Theater effective immediately.”