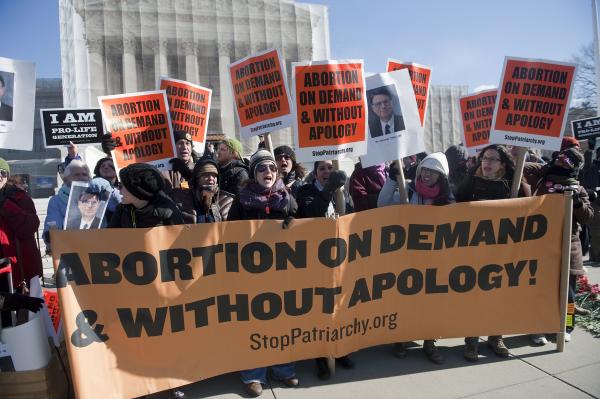 A spokeswoman for the Democratic Congressional Campaign Committee (DCCC) has contradicted her boss, DCCC chairman Rep. Ben Ray Luján (D-NM), who said, “There is not a litmus test for Democratic candidates” on abortion rights.

The contradiction highlights the continued turmoil within the Democratic Party over the issue of how to win back the majority in Congress.

Luján’s statement was also in sharp contrast to the Democratic Party’s 2016 platform – its most pro-abortion ever – and to Democratic National Committee (DNC) Chairman Tom Perez’s announcement in April that pro-life individuals are not welcome in his party.

“Every Democrat, like every American, should support a woman’s right to make her own choices about her body and her health,” Perez said, as HuffPost reported. “That is not negotiable and should not change city by city or state by state.”

“Spokeswoman Meredith Kelly’s statement that the DCCC flatly refuses to work with Democrats for Life contradicts the comments previously made by her boss, Rep. Luján, said Marjorie Dannenfelser, Susan B. Anthony List president. “It is further evidence that Democratic Party leaders are likely stringing pro-lifers along, using them for their votes without intending to back away from their extreme position on abortion.”

The abortion industry and its supporters in government, media, and the entertainment field claim abortion rights are now foundational to the party’s philosophy.

Last week, leftwing groups led by Democracy for America and NARAL Pro-Choice America released a “Statement of Principles” that claims abortion is an economic necessity for women.

“Democrats will fail to retake power in 2018 if we allow ourselves to be forced into a false choice between a populist progressive agenda and reproductive justice,” said Charles Chamberlain, executive director of Democracy for America. “Abortion rights are inextricably tied to the fight against economic and racial inequity, full stop, and until all leaders of our party fully understand that we’re going to keep losing.”

“Our basic rights and freedoms are under assault daily from the Trump Administration,” Ilyse Hogue, president of NARAL Pro-Choice America, also said. “The Democratic Party cannot give an inch in their opposition to this Administration. That is true across the board and especially true when it comes to abortion rights. The Democratic Party cannot and will not win if it turns it’s back on women and our fundamental rights.”

Brown, for example, rejected the notion that his party needs to embrace “ideological purity,” and said the Democratic base is “shifting.”

“I’d say, look, even on the abortion issue, it wasn’t very long ago that a number of Catholic Democrats were opposed to abortion,” Brown said. “So the fact that somebody believes today what most people believed 50 years ago should not be the basis for their exclusion.”

“In America, we’re not ideological, we’re not like a Marxist party in 1910,” Brown added. “We are a big tent by the very definition.”

HuffPost also reported that Harris – considered to be a potential 2020 presidential contender – said Democrats “can’t afford to have a litmus test in a way that really is a purity test.”

“My focus is going to be supporting all of my colleagues and doing everything we can to at least maintain our numbers as it relates to 2018 election,” she added.

“Protecting a woman’s health care, her right to choose, and her economic security are fundamental tenets of the Democratic Party, and as long as Republicans control Congress and the White House those values are constantly at risk,” Kelly said, nevertheless, according to the Atlantic.

Dannenfelser, however, says the continued contradictions on the abortion issue within the Democratic Party indicate an organization that is in crisis:

The Democratic Party cannot wave this deepening crisis away with facile platitudes. One-third of rank-and-file Democrats consider themselves pro-life. An even greater number of Democrats support banning late-term abortion after twenty weeks and oppose taxpayer funding of abortion. SBA List already has canvassers on the ground in Ohio and Florida, reaching out to low-turnout pro-life voters, including persuadable Democrats and Hispanics, educating them about the candidates’ position on abortion. Party leaders and vulnerable Democrat Senators up for re-election in 2018, take note: slamming the door in these voters’ faces is how elections are lost.

Pro-life Democrats insist the party must be more inclusive on the issue of abortion in order to regain the majority in Congress.

“We are going to need pro-life candidates in some of the districts that we need to win the House,” said pro-life Rep. Dan Lipinski (D-IL).