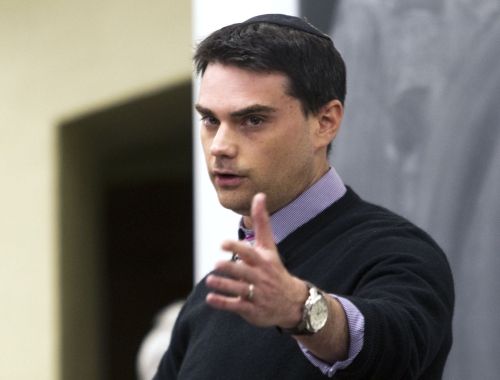 Last year, alt-Right provocateur Milo Yiannopolous sparked violent riots at the University of California at Berkeley, forcing the cancelation of his appearance.  Just one arrest was made.  He was not re-scheduled.  Next, hard-charging anti-Leftist David Horowitz was invited to address students and community members.  He was denied an on-campus venue, with university officials placing preposterous restrictions on his proposed visit, which was subsequently scuttled.  Then right-wing author and columnist Ann Coulter’s planned speech drew threats of violent riots.  The school said it could not guarantee her safety, nor the safety of attendees.  After various efforts to make it work anyway failed, her remarks were canceled.  And now, with months to spare to accommodate a planned appearance by conservative writer Ben Shapiro, the school is again making clear that — in spite of the administration’s empty rhetoric to the contrary — right-of-center guests are unsafe and unwelcome.  The latest details:

The University of California, Berkeley has blocked Young America’s Foundation (YAF) and the Berkeley College Republicans (BCR) from bringing Ben Shapiro to campus on September 14, vaguely claiming administrators were “unable to identify an available campus venue.” In an email to BCR members, Dean of Students Joseph Greenwell and Student Organization Coordinator Millicent Morris Chaney denied the students’ request for a venue for September 14, 2017, despite what Morris Chaney calls “extensive efforts.” Berkeley’s inability to find a lecture hall more than two months in advance is laughable. The university’s email is full of double-speak such as the statement “Ben Shapiro is welcome on our campus, and we are committed to supporting his, and your, rights to free speech,” despite paragraphs earlier denying him the same platform willingly granted to high-profile liberals. In the next breath, the same administrator states that Berkeley can only support the conservative students’ desire to host Ben Shapiro “when events are held at a time and location that allow for the provision of any required security measures.”

Raise your hand if you believe for one nanosecond that the university cannot find a single venue to host a speech slated to occur the month after next.  Anyone?  Claiming that a speaker is “welcome on our campus” and that the school is “committed to supporting” free speech rights — while simultaneously pretending that there are zero rooms on the entire campus that can accommodate said speaker and his free speech rights two months from now — is outright insulting. Forcing conservative groups to adhere to ridiculous logistical standards, including onerous and costly security demands, makes their speech literally less free.  The Berkeley College Republicans and YAF are right to be suing the school, which has become a national poster child for Orwellian silencing.  An angry leftist mob shut down Milo’s speech, exercising a speech-chilling heckler’s veto.  Rather than rebuking these thuggish tactics with swift legal and administrative reprisals, Berkeley officials have repeatedly coddled the hecklers, reinforcing their an-American behavior as effective.

It has become increasingly clear that this public institution is unable and unwilling to safeguard the core constitutional rights of its own students, faculty, and invited guests.  Until and unless they restore law and order, and unmistakably demonstrate that assaults on speech rights will not be tolerated, lawmakers in Washington (Sacramento is hopeless) should withdraw federal funds from the UC system.  I’m aware that this would be a draconian measure, the negative ripple effects of which would impact innocent parties, likely impeding important educational and research goals.  But whether those harmful consequences ever go into effect should be left up to university administrators.  The UC system’s highest-profile school needs to decide whether trampling all over fundamental liberties is worth risking severe repercussions from taxpayers’ elected representatives.  Those representatives should push the envelope in forcing that decision.  The president’s instincts are on target here.  I’ll leave you with Shapiro calling out California Governor Jerry Brown on the muzzling fascistic mob rule currently prevailing at his state’s flagship public university.  A disgrace:

So, @JerryBrownGov, do you plan on doing anything about UC Berkeley routinely violating the First Amendment? https://t.co/mR2Bc4foj6

UPDATE – California police have arrested this lunatic on charges pertaining to her role in inciting a separate, off-campus riot, including felony assault.