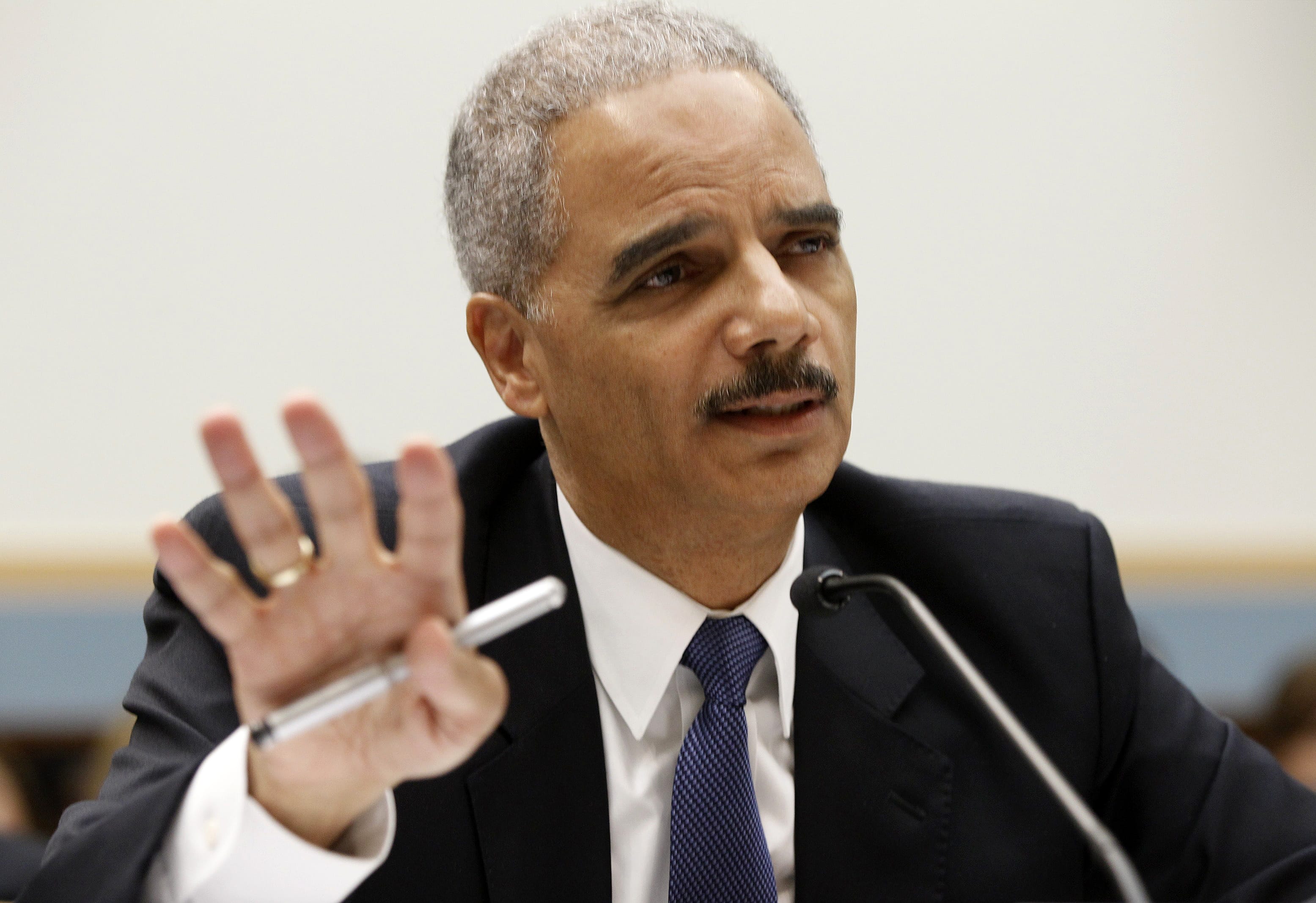 His goal: to lead the legal resistance to Donald Trump’s agenda — and perhaps even run against the president in 2020.

Seized by a sense of urgency to oppose Trump and restore what he regards as America’s best self, Holder is mulling a White House bid of his own, according to three sources who have spoken to him and are familiar with his thinking.

“Up to now, I have been more behind-the-scenes,” Holder told Yahoo News in an exclusive interview about his plans. “But that’s about to change. I have a certain status as the former attorney general. A certain familiarity as the first African-American attorney general. There’s a justified perception that I’m close to President Obama. So I want to use whatever skills I have, whatever notoriety I have, to be effective in opposing things that are, at the end of the day, just bad for the country.

On Monday morning, Holder launched this new phase of his career by traveling to California to speak out.

Nearly all of the officials who stepped to the podium in the lobby of Los Angeles’s Ronald Reagan State Building Monday were Californians. They showed up, and summoned the local press corps, in order to promote a piece of legislation called SB 54 (aka. the California Values Act), which is designed to prevent the Trump administration from forcing local police departments to assist in the deportation of undocumented immigrants. Critics — and even some supporters — have said it would transform the whole of California into a so-called sanctuary state.

The only outsider was Holder — the lanky lawyer with the short gray hair and the thick black mustache.

One of Barack Obama’s closest friends and most prominent appointees, Holder isn’t from California. (He lives in the Washington, D.C., area, where he’s a partner at Covington & Burling.) He no longer works in law enforcement. And he isn’t an immigration activist.

For the last few months, however, Holder has quietly been serving as outside counsel to the California legislature, working with de Leon and other Democrats to craft an aggressive legal response to what they consider President Trump’s most threatening policies.

Holder’s presence at Monday’s press conference was meant to emphasize that relationship — “to dramatize the issue, to raise the consciousness of people, to help the legislation along,” he told Yahoo News.

And so, in the Reagan building lobby, Holder explained why he thinks SB 54 is constitutional (“the federal government does not have the ability to force states to do things that are inherently federal in nature”) and why, in his view, the Trump administration’s threats to withhold federal funding in response aren’t (“the federal government can’t coerce states into doing something states don’t want to do by threatening to withhold support”). Meanwhile, Holder’s team at Covington released a lengthy memorandum backing him up.

But Monday’s event was also something bigger: a coming-out party of sorts for a figure who sees his work in California as a springboard to a new role as the key legal architect — and one of the major public faces — of the nationwide progressive pushback against President Trump.

Rarely mentioned as a 2020 contender and controversial while in office, Holder would enter any Democratic primary contest as a long shot. Even his engagement with the resistance is something of a surprise. For most of his career, Holder was seen as a conventional, mild-mannered figure. But he grew more pugnacious as attorney general, in part because Republicans never stopped attacking him, and he wound up pursuing a sharply progressive agenda during Obama’s second term.

Even so, Holder insists that he never envisioned himself as an anti-Trump crusader.

“I thought, frankly, along with everybody else, that after the election, with Hillary Clinton as president, I could walk off the field,” he said. “So when she didn’t win, I thought, ‘We’ll have to see how this plays out.’ But it became clear relatively soon — and certainly sooner than I expected — that I had to get back on the field and be in effective opposition.”

In the months ahead, Holder plans to expand the scope of his opposition to Trump. Part of that expansion will center on the National Democratic Redistricting Committee, a new, Obama-backed group that’s working to prepare Democrats for 2020, when states will redraw the boundaries of their legislative and congressional districts for the first time in a decade.

“Up until my now our efforts have been largely organizational — raising funds, generating support,” Holder told Yahoo News. “But now we’re moving into an operational phase where we’ll be filing lawsuits and I’ll be more visible talking about those issues.”

Another part of Holder’s campaign will involve explicitly political appearances. On Saturday, for instance, the former attorney general waded into Virginia’s marquee 2017 gubernatorial race with a keynote address at the state Democratic Party’s annual Jefferson-Jackson dinner, in which he excoriated Trump and embraced the resistance — the first of a series of such speeches, with North Carolina next on the calendar.

“We have come too far as a nation, sacrificed too much, made too much progress, to allow the state of our nation to be undermined by the extreme part of a divided minority administration,” Holder said, describing Trumpism as “the worst of us.” “If opposition is to be the course — and it must be — we must recognize and remember that the power of the American people has been too often underestimated. Once roused we are a mighty force.”

But the most intriguing — and perhaps most consequential — aspect of Holder’s ambitious new effort is a scheme, still in its early stages, to create a national, privately funded, PAC-like organization that would develop and coordinate legal resistance strategies among various states and localities that are determined to stymie Trump.

“California is in so many ways a trendsetter, whether it is in pop culture or in politics,” Holder told Yahoo News. “That’s why it was such an attractive possibility for me to go to California and work with the legislators there in crafting their response to the Trump administration — because I think what California does gives courage to other states and other public officials in other parts of the country who might be thinking about principled opposition. It shows how that opposition can take shape.”

So far, the legal resistance has been largely improvised, with young liberal lawyers spontaneously descending upon airports in the wake of Trump’s Muslim travel ban and state attorneys general individually butting heads with Jeff Sessions, their federal counterpart.

Holder wants to change that.

“You look at this as kind of a continuum, where you oppose the policy as it is proposed, you hope that it doesn’t become law, but then, to the extent that it does, you use the courts to try to overturn it,” he explained. “As the different states and different public officials start to stand for the same things and take the same positions — as they start to use the same tactics — the opposition becomes that much more effective.”

For now, Holder will continue to set the stage in California. (Earlier this month, the state Assembly decided not to renew his $25,000-a-month contract; the state Senate, however, plans to retain his services indefinitely.) And while immigration isn’t the only hot-button topic on Holder’s to-do list — de Leon is also soliciting his advice on climate change and health care — it’s the one that’s front-and-center right now, as Immigrations and Customs Enforcement (ICE) agents ramp up noncriminal deportations and the courts consider whether Trump’s executive order on sanctuary cities is constitutional.

“We’re here with a very clear purpose: to underscore the undeniable truth that preserving and enhancing trust, real and genuine trust between law enforcement and the diverse communities they serve, is essential for the safety and well-being of all residents of this great state — indeed, this great nation,” Holder said at Monday’s event, alluding to the argument that undocumented immigrants will stop reporting crimes to the local cops if those same officers are also tasked with deporting them.

“California is leading,” Holder concluded. “California is doing the right thing. This is something that needs to be done nationwide.”

If Holder gets his way, he will spend the months and years ahead ensuring that’s exactly what happens