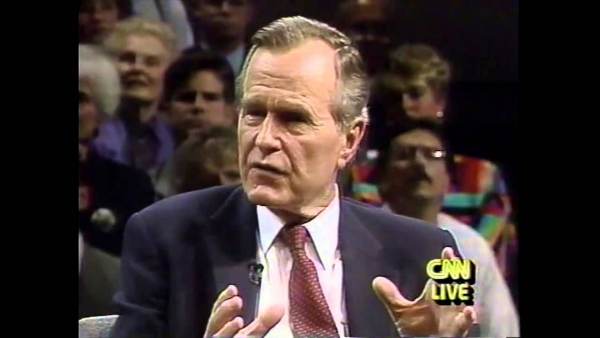 Former Republican president George H.W. Bush resigned in outrage from the National Rifle Association (NRA) in 1995 following the Oklahoma City bombing, in which explosives killed American civilians but guns were not used.

Bush expressed his strong support for federal government agents and cast scorn at conservatives who did not believe the Oklahoma City bombing should be used as a pretext to disarm Americans. Similar incidents have surfaced since Oklahoma City, inviting similar calls for the government to disarm the law-abiding populace.

“I was outraged when, even in the wake of the Oklahoma City tragedy, Mr. Wayne LaPierre, executive vice president of N.R.A., defended his attack on federal agents as “jack-booted thugs.” To attack Secret Service agents or A.T.F. people or any government law enforcement people as “wearing Nazi bucket helmets and black storm trooper uniforms” wanting to “attack law abiding citizens” is a vicious slander on good people,” Bush wrote in his May 3, 1995 letter, which The New York Times dutifully published in full without comment.

Bush said that one of his Secret Service agents was killed in Oklahoma City, which led to the execution of an alleged right-wing radical named Timothy McVeigh, who never confessed to the bombing.

Bush also praised then-FBI director Louis Freeh, who is a major Clinton-World figure who was later retained by Alan Dershowitz to help defend Bill Clinton from accusations of involvement in the Jeffrey Epstein underage sex scandal.

“I am a gun owner and an avid hunter. Over the years I have agreed with most of N.R.A.’s objectives, particularly your educational and training efforts, and your fundamental stance in favor of owning guns,” Bush wrote.

“However, your broadside against Federal agents deeply offends my own sense of decency and honor; and it offends my concept of service to country. It indirectly slanders a wide array of government law enforcement officials, who are out there, day and night, laying their lives on the line for all of us,” Bush stated.

“You have not repudiated Mr. LaPierre’s unwarranted attack. Therefore, I resign as a Life Member of N.R.A., said resignation to be effective upon your receipt of this letter. Please remove my name from your membership list. Sincerely, [ signed ] George Bush,” the former president concluded.

The recent Parkland school shooting in Florida has sparked a quick and well-organized campaign against the NRA led by David Hogg, the son of a retired FBI agent who attended the school in question.