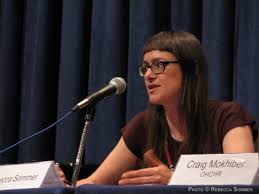 “Those people who ate with me, drank, danced, laughed – they talk about me as ‘stupid German whore’.”

The must-read Vlad Tepes blog posted a lengthy but fascinating interview recently with a German artist, activist for the rights of indigenous peoples, and UN advisor Rebecca Sommer, posted by the Polish website EuroIslam.

As Vlad Tepes notes, “Rebecca used to support Muslim ‘refugees’ in Germany, and describes how her experience made her gradually change her mind over core issues.” That’s putting it mildly. Sommer’s experiences were eye-opening enough that she is now unafraid to declare truths about Islamic mass migration that are unacceptable to the European elites who insist on accelerating their countries toward cultural suicide.

Among some of her revelations:

It’s worth reading the entire thing and sharing with anyone whose eyes are still closed to the threat of importing huge numbers of people into the West with values aggressively opposed to ours. Read it all here.