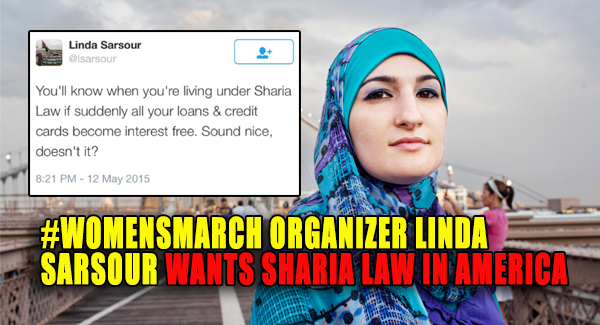 How does defending sharia law translate into feminist intersectionality? For the Women’s March, it’s a key part of their work.

Glamour Magazine is willing to buy into this fake intersectionality. The latest issue, named Linda Sarsour one of its Glamour 2017 Women of the Year. As a co-chair of the Women’s March, Sarsour has been honored by Time Magazine and defended by the New York Times as a target of “right-wing hate.” But no one has pointed out that Sarsour has actually promoted Sharia law as beneficial.

Not only that, Sarsour has vehemently gone after women who have spoken out against Sharia Law, like Brigitte Gabriel and Ayaan Hirsi Ali, saying that they deserved “an ass whooping” and “their vaginas taken away” for making “front page covers and shit.” (Classy, isn’t she?) What makes this even worse is that Ali is actually a victim of female genital mutilation.

The Women’s March was all about “intersectionality,” according to Glamour. (That is, the pooling of the angry complaints of various grievance groups into a single, cacophonous whine aimed at the only real enemy: straight white males.) The co-chairs, including Sarsour, “put most everything else in their lives on hold, working around the clock to build websites and marketing materials and, most of all, to make sure intersectionality was a feature, not a bug.” But the Women’s March wouldn’t let pro-life groups march at the event, so was there intersectionality?

Glamour painted the Soros-funded Women’s March in the brightest, most woke light possible: “Soon [Teresa] Shook and [Bob] Bland joined forces, attracting the attention of thousands who were angry that voters had elected a race-baiting white man hostile to issues like reproductive rights, civil rights, and fair pay.”

Even CNN’s Jake Tapper got into a well-documented disagreement with Sarsour over Twitter. He called her comments to Ayaan Hirsi Ali “ugly sentiments.” But Sarsour attacked Tapper as a “member of the alt-right,” even though Tapper is Jewish, and decidedly not espousing the anti-Semitic alt-right beliefs.

But feminists know best how to turn a blind eye.