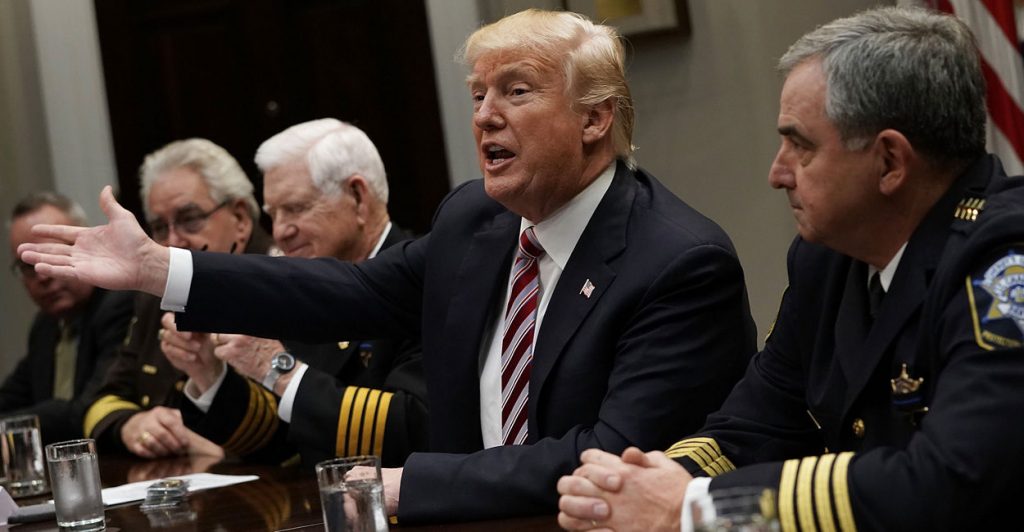 For Clark County, Georgia, Sheriff Ira Edwards Jr., the danger sanctuary cities pose to communities became overwhelmingly clear during a recent conversation he had with a federal judge.

“I was very, very surprised when I was in a training [conference] this past week, and there was a federal magistrate judge that told us she had sentenced a person over 25 times, and that person has come back into our country,” Edwards told The Daily Signal.

“My concern is, as a sheriff, if we are going to secure our homeland, it is going to be imperative that we build some type of border to prevent those that would do harm within our community, within our homeland,” Edwards said.

Edwards, a member of the board of directors for the National Sheriffs’ Association, along with other sheriffs from across the country, met Tuesday with President Donald Trump and White House officials to discuss illegal immigration, the opioid addiction crisis, and the transfer of excess military equipment for local law enforcement.

“Sanctuary city” is the term commonly used to describe jurisdictions that refuse to cooperate fully with federal immigration enforcement officials. The Justice Department has sought to penalize those jurisdictions by withholding certain federal law enforcement grants from them.

The sheriffs noted the political decision of a city to defy federal law affects nearby localities.

“When we have the sanctuary cities, that is going to be a breeding ground for those who come back that are undocumented, coming back into our community. That is why I am kind of concerned,” Edwards said in response to a question from The Daily Signal as the sheriffs took queries from a small group of reporters after the meeting with the president.

“What we are saying is, we welcome people to come, but when you commit crime, and you create havoc in our community, we have issues with that, because it becomes not only a national security issue, but it becomes a public safety issue,” he said.

The National Sheriffs’ Association’s position is that sanctuary cities encourage illegal immigration, pose a threat to public safety and national security, and impose a severe financial burden on taxpayers.

It costs about $19 million per day across the country to house and care for between 300,000 and 450,000 convicted criminal immigrants in the country, Edwards said, citing Justice Department and Homeland Security Department numbers. He noted that not all of those are in the country illegally.

In discussing the opioid threat, policymakers should reconsider the national trend toward legalizing marijuana, said Polk County, Fla., Sheriff Grady Judd, president of Major County Sheriffs of America, an association of elected sheriffs of counties with populations of 500,000 or more.

“Every person I’ve ever asked that has a drug-addiction problem, I would ask them intentionally, ‘What was your drug of choice, your first drug of choice, that set you on this path?’” Judd told reporters outside the White House, answering his own question: “Marijuana. Every time, marijuana.”

During brief remarks ahead of the meeting in the Roosevelt Room of the White House, Trump said his administration supported law enforcement “100 percent” and wanted to listen to law enforcement officials’ suggestions.