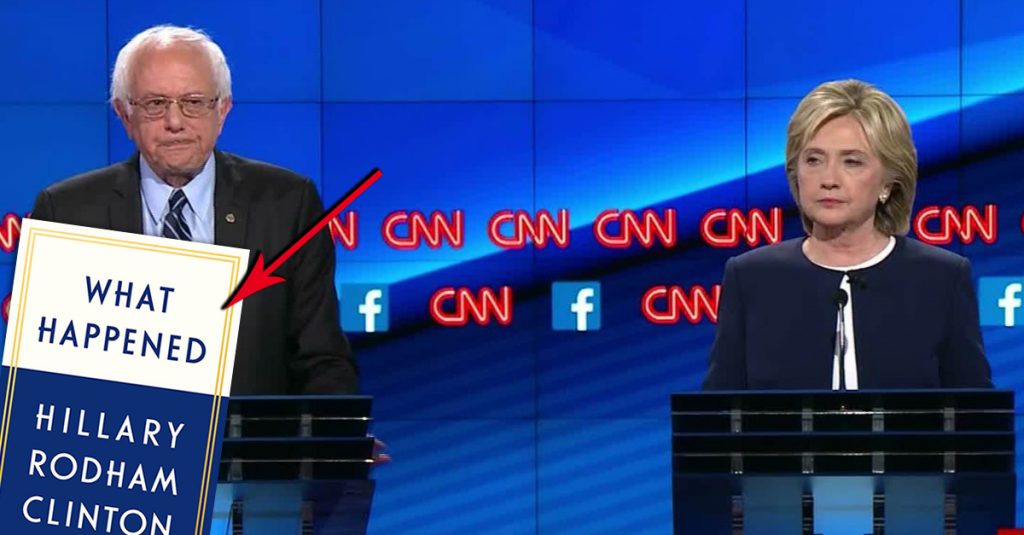 Add Bernie Sanders to Hillary Clinton’s laundry list of things to blame for her election loss.

In her new book, “What Happened,” Clinton accused Sanders of “paving the way” for then-candidate Donald Trump’s “Crooked Hillary” attacks.

According to excerpts of the book, which will be released Sept. 12, Clinton said Sanders failed to make a policy argument against her so instead he resorted to “innuendo and impugning my character.”

She also compared the Vermont senator to the “deranged hitchhiker” from the film “There’s Something About Mary.”

“A deranged hitchhiker says he’s come up with a brilliant plan,” she wrote, setting the scene from the movie. “Instead of the famous ‘eight-minute abs’ exercise routine, he’s going to market ‘seven minute abs.’ It’s the same, just quicker. Then the driver, played by Ben Stiller, says, ‘Well, why not six-minute abs?’”

Clinton added: “That’s what it was like in policy debates with Bernie. We would propose a bold infrastructure plan or an ambitious new apprenticeship program for young people, and then Bernie would announce basically the same thing, but bigger. On issue after issue, it was like he kept proposing four-minute abs, or even no-minute abs. Magic abs!”

She also lamented the advice she received about how to deal with Sanders’s attacks.

“My team kept reminding me that we didn’t want to alienate Bernie’s supporters,” the former secretary of state wrote. “President Obama urged me to grit my teeth and lay off Bernie as much as I could. I felt I was in a straitjacket.”

Additionally, Clinton slammed Sanders for getting into the race more to disrupt the Democratic Party than anything.

“He certainly shared my horror at the thought of Donald Trump becoming president, and I appreciated that he campaigned for me in the general election. But he isn’t a Democrat—that’s not a smear, that’s what he says. He didn’t get into the race to make sure a Democrat won the White House, he got in to disrupt the Democratic Party,” she wrote.

“I am proud to be a Democrat and I wish Bernie were, too.”

Sanders, of course, self-identifies as a “democratic socialist.”

Clinton will soon go on a tour promoting her book across the country—but the chance to see the former Democratic presidential nominee won’t come cheap.

In New York City, for example, people have to pay $125 to come to a book signing, while a meet and greet in Toronto costs $2400.