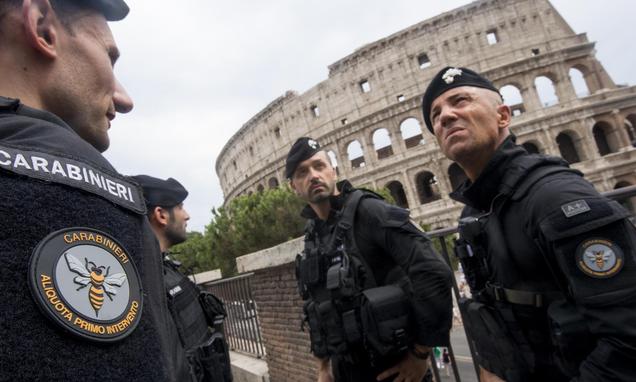 An immigrant shouted ‘I want to die for Allah’ as he was escorted away after attacking a police officer with a knife in Italy.

According to the paper, Diallo was seen near Central Station in Milan where airport shuttles depart.

An airport shuttle attendant noticed him shouting and asked if he needed something, at which point he pulled out a knife and made threats.

The shuttle crew barricaded themselves in the shuttle bus in fear of Diallo, who was visibly distressed and shaking his knife. The bus occupants then called the police.

When police attended and restrained Diallo, he managed to attack one of the officers in the shoulder. Fortunately the police officer, who was taken to hospital, was wearing a bullet proof vest and only suffered a minor injury.

Investigations revealed that Diallo, who had no identification on him when he was apprehended, had given the authorities four other pseudonyms when stopped in the past for, among others, threatening behaviour and resistance to public officials. He also had an extradition order issued to him on July 4.

Roberto Maroni, president of the Lombardy region, wrote on his Facebook page: “He was subject to an extradition order from the Sondrio Police headquarters, yet he moved in our territory free and undisturbed.

“I express solidarity with the affected officer and all forces of order that guarantee our security and defend us from these crazy criminals every day.”

Silvia Sardone, a Milan City councillor from the centre-right Forza Italia party, said: “An emergency situation has been underestimated for years by the left in this town, which continues to oppose a serious security plan in the area to counteract crime and degradation.”

She accused the left of preferring “the squalor of hundreds of immigrants” to trying to “save this area, entry gate to so many tourists in the city.”

The paper states that the police are not currently treating the incident as a terrorist attack, as there is nothing to suggest Diallo has been radicalised.

The incident is similar to another which took place in the same area in May, when a half Tunisian man attacked a policeman and two soldiers with a kitchen knife.