Ilhan Omar (D-MN), along with her comrades Rashida Tlaib (D-MI) and Alexandria Ocasio-Cortez (D-NY), has gotten a lot of press since winning a seat in Congress. Despite her non-apology for bigoted, anti-Semitic statements she made earlier this month, Omar remains a virulent anti-Semite. But it is much worse than that: In addition to likely criminality, her extreme Left positions and connections to terrorists make her a security risk.

Some have demanded she be removed from the House Foreign Relations Committee, a position awarded to her by Speaker Nancy Pelosi. But she has no business in Congress at all, and should at the very least be investigated for numerous crimes committed over a period of years.

Omar’s position on Israel is long-established and well-known. She supports the Palestinian terrorist group Hamas, the Boycott, Divestment, and Sanctions (BDS) movement against Israel, and is overtly anti-Zionist. The 2012 tweet below — which she only deleted in the past few days — reiterates the incessant Arab narrative that casts Israel as an invader and abuser of Arabs living in the West Bank and Gaza Strip: 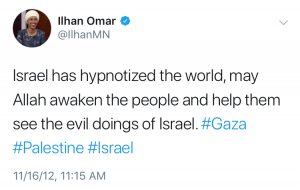 Exactly the opposite is true. In every case where Israel uses military force, it has responded to provocations from Arab terrorists of Hezbollah, Hamas, the PLO, and other factions. How is it that Israel endures weeks-long barrages of rockets from Palestinian-controlled areas and almost daily terrorist attacks against its citizens, yet those governments face no condemnation? Meanwhile, a worldwide push exists to destroy Israel through BDS: Who has hypnotized whom?

During her campaign for Congress, Omar claimed she opposed BDS, however, within days after winning her election, she publicly stated her support for it. Omar also claims Israel is an “apartheid” state. The Communist newspaper In These Timesdefended Omar, reiterating the theme that Israel is “an apartheid system built on violent theft of Palestinian land and decades of oppression.” Let me repeat that: the Communist newspaper In These Times calls Israel an apartheid state. Considering the source, that’s a LOL moment and should immediately cause the reader to reject the message out of hand. False propaganda that stands reality on its head is the Communists’ stock in trade, and this is one of their favorites.