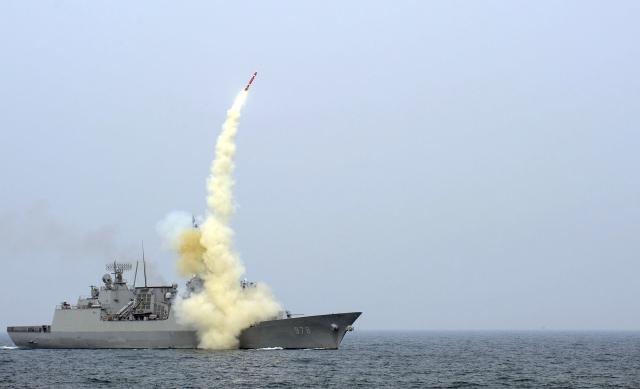 The United States faces a growing threat of ballistic and cruise missiles from China, Russia, Iran, and North Korea, according to a military intelligence report.

“Ballistic and cruise missiles present a significant threat to U.S. and allied forces overseas, and to the United States and its territories,” states the latest report by the National Air and Space Intelligence Center in Ohio.

The report warns that both China and Russia are expanding their force of strategic nuclear missiles with new multi-warhead weapons.

North Korea now has three intercontinental-range missiles and is moving ahead with a submarine-launched ballistic missile.

The report was published days before North Korea on July 4 conducted the first flight test of the new Hwasong-14 missile, described in the report as a new road-mobile ICBM first unveiled in October 2015.

In addition to that missile, North Korea also has another road-mobile ICBM called Hwasong-13, also known as the KN-08, and the Taepo Dong-2.

“Any of these systems could be exported to other countries in the future,” the report said.

Iran appears to be on a path to developing long-range missiles as part of what the report said was “Tehran’s desire to have a strategic counter to the United States.”

“In 2015, Iran publicized the launch of the Emad-1, which officials claim is Iran’s first long-range missile that is guided throughout flight and capable of hitting its targets with high-precision,” the report said.

“Iranian officials have also announced plans for an Emad-2 with greater precision as well as a new Sejjil which can also be guided all the way to the target.”

The proliferation of missile systems and technology has resulted in over 20 nations having ballistic missiles that the report said “likely will be a threat in future conflicts involving U.S. forces.”

In the past 30 years, missiles were used in several wars, including the Iran-Iraq war, the Afghan civil war, the war in Yemen, the 1991 and 2003 Persian Gulf conflicts, Russian military actions in Chechnya and Georgia, and most recently in the conflicts in Syria and Ukraine.

The NASIC missile threat report is published periodically and is the first report since 2013.

For the first time, the center reveals new details about China’s force of “close-range” missiles that could be used in an attack on Taiwan.

The report also warns that new “hypersonic” missiles are being developed that have characteristics of both ballistic and cruise missiles. Ballistic missiles travel in space on a trajectory to their targets while cruise missiles often fly close to land or sea.

Hypersonic missiles are maneuvering weapons launched atop ballistic missiles that glide to their targets. They are being developed by China and Russia as both strategic nuclear and conventional weapons capable of passing through U.S. missile defenses, often at speeds of up to 7,500 miles per hour.

“Overall, the threats posed by ballistic missile delivery systems are likely to continue to increase and grow more complex,” the report said.

China’s missile forces are expanding in both numbers and types.

“China continues to have the most active and diverse ballistic missile development program in the world,” the report said. “It is developing and testing offensive missiles, forming additional missile units, qualitatively upgrading missile systems, and developing methods to counter ballistic missile defenses.”

Beijing’s nuclear missile forces are expanding with multiple-warhead systems that will expand China’s warhead stockpile in the coming years.

On China’s close-range missiles, which can be used in artillery salvos during a conflict with Taiwan or against ships in the South China Sea from newly militarized islands, the report identified 19 different missiles with ranges of between 24 miles to 173 miles.

Russia, North Korea, Iran, Pakistan, and India also have close-range missiles some of which are precision guided.

New missiles with ranges of between 620 miles and 3,400 miles are in development by China, North Korea, Iran, India, and Pakistan, and many will be armed with nuclear or other unconventional warheads.

“All of these countries except Iran have tested nuclear weapons,” the report said.

Iran has promised to give up developing nuclear weapons for the next 10 years under the deal reached in 2016. Critics note that the continued development of Iran’s long-range missiles is an indication Tehran plans to break out of the treaty in the future.

The report for the first time mentions Russia’s new hypersonic missile called the “object 4202” that will be used to penetrate missile defenses. Several other new long-range missiles, including a heavy ICBM called the Sarmat, are being deployed or are in development.

“The number of warheads on Chinese ICBMs capable of threatening the United States is expected to grow to well over 100 in the next five years,” the report said.

The intelligence report for the first time confirms that China’s new CSS-N-14 submarine-launched missile is deployed on four missile submarines.

“This missile will, for the first time, allow Chinese SSBNs to target portions of the United States from operating areas located near the Chinese coast,” the report said.

Cruise missile threats, those that are guided by satellite navigation, also are increasing.

Russia’s Club-K cruise missile is dubbed the “container launcher” weapon that is fired from what appears as a standard shipping container, making it easy to hide and fire from cargo ships, trains, or commercial trucks.

“The majority of LACMs will still be subsonic, but supersonic and hypersonic missile will be deployed in the future,” the report said.

Missile weapons are sought by many nations because they can be used effectively against adversaries with formidable air defenses that make using aircraft impractical or too costly, the report concludes.

“In addition, missiles can be used as a deterrent or an instrument of coercion…. Even limited use of these weapons could have devastating consequences if armed with chemical, biological, or nuclear warheads.”

Fisher said China is a world leader in developing new, longer range and precision guided artillery rockets like the 124-mile-range CSS-X-16, and the new 174-mile range CSS-14 Mod-X-2. A third is the 161-miles range CSS-9 Mod-X-2.

“NASIC, however, does not mention that these new systems have the potential to carry five to eight missiles per launcher, so they could rapidly increase the number of missile targeting Taiwan into the multiple thousands, when considering potential reloads,” he said.

“If China modifies all of its DF-5 to the 10 warhead DF-5C standard, as it has started to modify the older single-warhead DF-5A with the three-to-five warhead DF-5B warhead bus, this type of ICBM alone could account for over 200 warheads,” he said.

“Then to this you add the road and rail mobile 10 warhead DF-41, with at least two units of six missiles accounting for 120 warheads. Many times 100 Chinese warheads is much more than ‘well over.'”

U.S. warhead cuts under the Obama administration should be reconsidered, he said.

“China’s potential to approach at least 1,000 warheads over the next decade, plus Russia’s missiles, means the United States must prepare to exceed existing limitations on deployed weapons or face the possibility of coordinated nuclear blackmail from China and Russia,” Fisher said.

Mark Schneider, a former Pentagon nuclear missile expert with the National Institute for Public Policy, said the report reveals that Russia’s 3M-14 Kalibr cruise missile, capable of being fired from the ground, ships, or submarines, has a range of 1,553 miles.

“This is obviously the INF Treaty violation,” he said of the 1987 U.S.-Russian accord banning all ground launched cruise missiles with range of between 620 and 3,420 miles.

The U.S. government has accused Russia of violating the INF treaty but has not provided details of the cruise missile Moscow has deployed in violation of the accord.