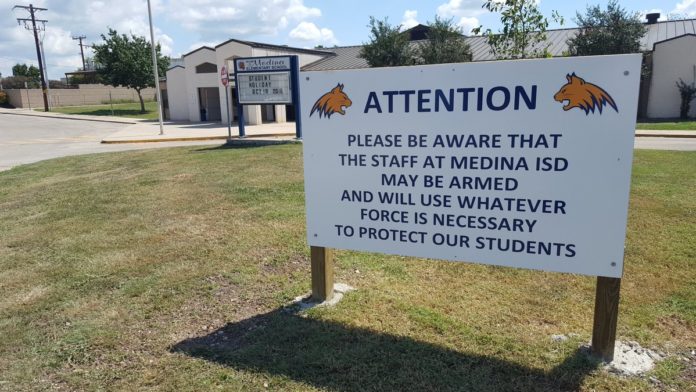 In response to a rash of highly publicized mass shootings in schools, a Texas School District took action by placing large signs in front of every entrance warning that staff at the school may be armed, and that they will use whatever force is necessary to protect their students.

Medina ISD is putting these signs at each entrance. What they hope to accomplish at 5 on @ksatnews pic.twitter.com/juSCX4qW6F

The massive signs stand guard in front of Medina Independent School District in Medina, Texas. The school is attended by 300 kindergarten through 12th grade students, who are likely in the safest school building in America.

Being a small rural town, citizens of Medina are no stranger to firearms, and don’t look at them as a dangerous machine waiting to kill people, but instead as a tool that should be respected.

The citizens of Medina applauded the decision, with one women stating:

“Schools have been a target for, for lack of a better word, crazy people,” the women stated, “I’m perfectly fine with it.”

As I wrote Friday:

In response to the Parkland, Florida school shooting that left 17 people dead, the anti-gun voices in Washington, D.C. immediately began screaming for gun control. But the truth is, gun control won’t stop mass shootings, instead, it causes them to happen.

Research compiled by the Crime Prevention Research Center shows that over 98% of U.S. mass shootings from the 1950’s until 2016 have occurred in gun free zones. This research proves one simple fact: Mass shooters target gun free zones. That likely has to do with mass shooters attempting to amass the largest body count they can before police arrive; an armed citizen in the way would likely lead towards quicker resistance, and a lower body count.

Unsurprisingly, as it turns out, Wednesday’s shooting that left 17 people dead, and at least 14 injured also occurred in a gun free zone. Under Florida Statute 790.115: “Possessing or discharging weapons or firearms at a school-sponsored event or on school property prohibited; penalties;”. In other words, absolutely zero firearms on school property, with the exception of police officers, who really can’t be everywhere.

Florida’s laws are even more oppressive than the restrictions put forth by the Federal Gun Free School Zone Act, which has been in effect since the 1990’s, and hasn’t stopped any of the school shootings that have occurred since then.

Despite these facts, Democrats in Congress have already begun demanding more gun control, taking to Twitter to make their demands known.