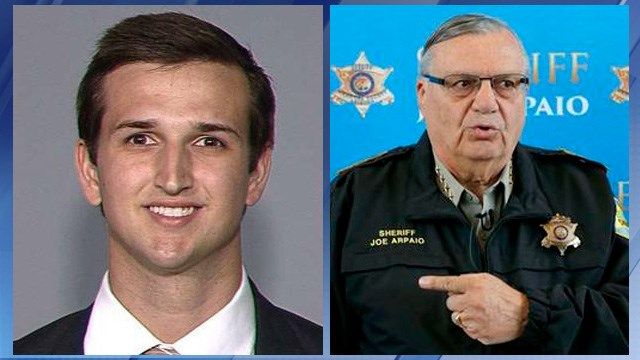 Months after President Trump pardoned former Maricopa County Sheriff Joe Arpaio who was a victim of malicious prosecution from the Obama regime, the left still has a bug up their collective asses regarding the patriotic lawman.

Sheriff Joe’s no-nonsense approach to crime and illegal aliens turned him into a figure who liberals demonized relentlessly culminating in Obama’s abuse of his politicized federal agencies to gin up a political persecution of Arpaio simply because he could. But things changed under Trump and it is hardly a reach to say that there was a new sheriff in town in D.C.

But even after the aging Arpaio was spared the indignity of being crammed into a jail cell, he is still being politically persecuted – this time by the Flake family.

Never Trumper Jeff Flake has been forced to acknowledge that he has become such a hated figure in his own state that he won’t be running for re-election to the U.S. Senate next year.

Therefore, Austin Flake is seeking revenge by proxy with a federal lawsuit against Arpaio for what he claims was an attempt to politically damage daddy after 21 dogs that he was caring for died of heat exhaustion in 2014, leading to felony animal cruelty charges being filed against him. Junior Flake was watching the animals at a kennel owned by his in-laws who were out of town when the A.C. failed.

Son of Flake’s lawsuit alleges that Sheriff Joe hit him and his then-spouse with the charges so that he could make the RINO senator look bad – as if he hasn’t done a good enough job of it himself.

A federal lawsuit set to go to trial next month marks the latest legal action brought against former Arizona Sheriff Joe Arpaio over allegations that he pursued a trumped-up criminal case to get publicity and embarrass an adversary.

The political opponent in this case: U.S. Sen. Jeff Flake.

One of Flake’s sons filed a malicious-prosecution lawsuit, saying Arpaio pursued felony animal cruelty charges against him and his then-wife in a bid to do political damage to the senator and gain publicity.

Austin Flake and his wife were charged in the heat-exhaustion deaths of 21 dogs in June 2014 at a kennel operated by his in-laws. The Flakes were watching the dogs when the in-laws were out of town.

The dogs died when an air conditioning unit failed in a small room where the animals spent the night.

The case against the Flakes was dismissed at the request of prosecutors, and the owners of the kennel pleaded guilty to animal cruelty charges after an expert determined the air conditioner failed because the operators didn’t properly maintain it.

The lawsuit, which is scheduled for trial on Dec. 5, alleges that Arpaio was intent on linking the Flakes to the deaths, going so far as to conduct surveillance on the senator’s home. The suit also says Arpaio’s investigators examined phone records to see if the younger Flake called his father during the time he was watching the dogs.

Lawyers for Austin Flake and his then-wife have said the senator disagreed with Arpaio over immigration and was critical of the movement questioning the authenticity of then-President Barack Obama’s birth certificate.

The first question is how in the hell can you be so dumb that you would not notice that the air conditioning was out and allow 21 canines to roast to death? How could there not be charges of some sort filed against son of Flake?

Secondly, it sure is convenient that this case is in the news now as the feckless R.A.T. Jeff Flake takes his Trump bashing to another level, perhaps Flake will just do away with his charade and run as a Democrat.

At any rate, it is yet another politically-motivated prosecution of an 85-year-old public servant who just happens to value the country over political correctness.

This scam should be thrown out of court.