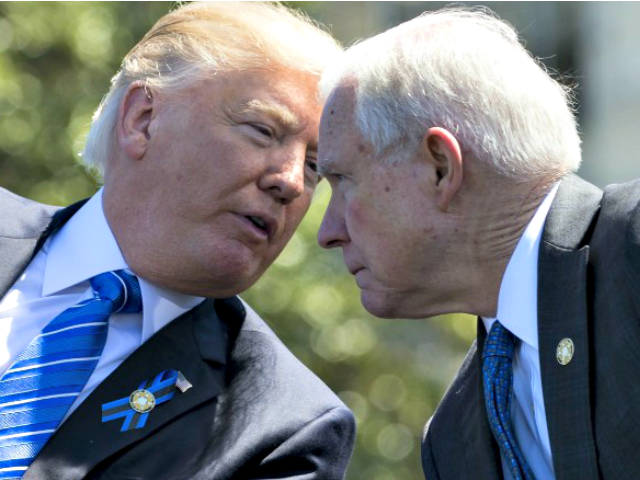 Addressing reporters at the Department of Justice, Sessions, who made resistance to amnesty a focal point of his decades long political career, took the lead in announcing the fulfillment of one of President Donald Trump’s major campaign promises. A DOJ spokeswoman, however, made clear it was the president who had made the final decision.

“I’m here today to announce that the program known as DACA that was effectuated by the Obama administration is being rescinded,” Sessions said. Later calling for an “orderly and lawful wind-down.”

In ordering this blanket exception, President Obama was nullifying part of a law that he simply disagreed with … If a president can claim sweeping discretion to suspend key federal laws, the entire legislative process becomes little more than a pretense … The circumvention of the legislative process not only undermines the authority of this branch but destabilizes the tripartite system as a whole.

Deferred Action on Childhood Arrivals (DACA) will be rescinded by a memorandum from Acting Secretary of Homeland Security Elaine Duke, effective immediately. No current beneficiaries will lose their protected status for six months, but no new applications for DACA status will be taken after Tuesday. Those already under DACA who have already applied for their two-year renewals will have those requests processed. Those whose status expires in the sixth month grace period will still be able to apply for their two-year renewals until October 5, 2017. A senior DHS official made clear that those illegals whose DACA protection is pending and who leave the country at any time will lose any possibility of receiving that protection.

DACA offered effective immunity from the law for illegal aliens who arrived at under age 16 before 2007. Over 800,000 illegals are currently being shielded from deportation and given work authorization under the program. The average age of these illegals is 25. As Sessions put it:

This unilateral executive amnesty, among other things, contributed to a surge of minors at the southern border that yielded terrible humanitarian consequences and it denied jobs to hundreds of thousands of Americans by allowing those same illegal aliens to take those jobs.

According to the Department of Homeland Security, Sessions had sent a letter to that agency on Monday stating that DACA:

[W]as effectuated by the previous administration through executive action, without proper statutory authority and with no established end-date, after Congress’ repeated rejection of proposed legislation that would have accomplished a similar result. Such an open-ended circumvention of immigration laws was an unconstitutional exercise of authority by the Executive Branch.

In that letter, Sessions also offered a dire assessment of DACA’s ability to stand up to the constitutional challenge threatened by ten state attorneys general. A lawsuit by those states had already overturned the companion Deferred Action for Parents of Americans and Lawful Permanent Residents (DAPA) program. DACA, Sessions wrote, “has the same legal and constitutional defects that the courts recognized as to DAPA, it is likely that potentially imminent litigation would yield similar results with respect to DACA.”

In his remarks, Sessions gave his assessment of the Trump administration’s progress on illegal migration so far, saying:

This administration has made great progress in the last few months toward establishing a lawful and constitutional immigration system. This makes us safer and more secure. It will further economically the lives of millions who are struggling and it will enable our country to more effectively teach new immigrants about our system of government and to assimilate them to the cultural understandings that support it. The progress in reducing illegal immigration at our border seen in recent months is almost entirely due to the leadership of President Trump and his inspired immigration officers. But the problem is not yet solved. And without more action, we could see illegality rise again rather than be eliminated.

DHS officials, meanwhile, noted that Congress will now have six months to “deliver on appropriate legislative solutions” regarding so-called “dreamers.”

Echoing that, Trump called on Congress Tuesday morning to “get ready to do your job.”

Congress, get ready to do your job – DACA!

Within the administration, Attorney General Jeff Sessions was reported to have pushed the president to end DACA, while Jared Kushner and wife Ivanka Trump allegedly tried to preserve the order.