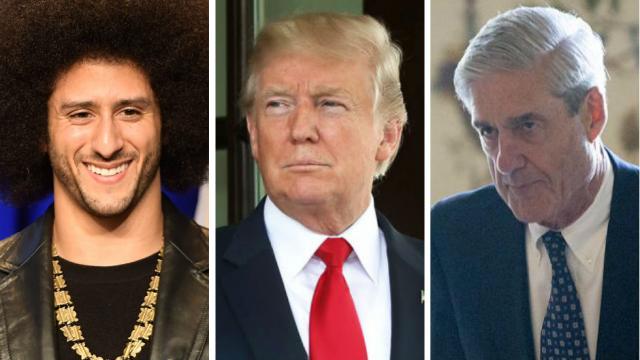 Time magazine is finalizing the decision process for their “Person of the Year” and it should come as no surprise that the leftist rag is zeroing in on two figures that in a different – and more normal – period of history wouldn’t have been shunned.

The first would be Deep State dirty cop Robert Mueller. George W. Bush’s former FBI Director has become a hero to the anti-Trump left despite the clear and present danger of a rogue operative conducting a witch hunt to destroy the legitimately elected President of the United States at all costs.

Mueller has zero accountability and is setting a precedent of vastly expanding the powers of the police state. Not only that but it was just announced that he had to fire one of his key prosecutors due to texts exchanged during an adulterous affair that was critical of Trump. Why Peter Strzok was singled out from the rest of Mueller’s partisan Gestapo is unknown at this time.

The second – and far and away the favorite – candidate for the honor is former NFL player Colin Kaepernick, the cop-hating, race-baiting miscreant who launched a movement and planted the seeds that will eventually destroy the NFL.

It’s probably appropriate that Time would bestow the honor on Kaepernick considering that the rag was instrumental in promoting his image last year when he was featured on the cover along with a fawning feature.

Via The Hill “Time’s ‘Person of the Year’ shortlist includes Trump, Mueller, Kaepernick”:

Time on Monday released the 10 finalists selected this year.

Time described Trump as spending his first year in office “attempting to dismantle the work of the Obama Administration.” The magazine added that Trump has also continued to “spark feuds and controversy with an unfiltered Twitter feed.”

Mueller is spearheading an investigation into Russian interference in the 2016 presidential election. The investigation has led to charges against four individuals including former Trump campaign chairman Paul Manafort and former Trump national security adviser Michael Flynn.

That President Trump would be on the list proves that Time’s CEO lied about the POTUS turning it down but hey, it’s all propaganda anyway so what is one more fib?

The 10 finalists for the 2017 Person of the Year are: Mueller, Kaepernick, Trump, North Korea’s “Rocket Man” Kim Jong un, “Wonder Woman” director Patty Jenkins, every one of the illegal alien DREAMERS, Saudi Prince Mohammed bin Salman, Chinese President Xi Jinping and the #MeToo movement which in it’s early stages is already shaping up as a misandrist force that has risen from the ashes of Hillary’s defeat to wage total war against anyone who has a penis.

The Koch Brothers can’t complete their purchase of Time fast enough because a total purge of the leftist management is in order.