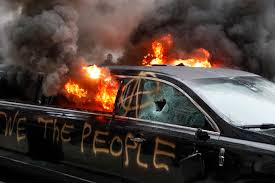 Leftists arrested for rioting during President Trump’s January 20, 2017 inauguration are expected in court today after being charged with multiple felonies. Their comrades are urging supporters to pack the court house in the name of solidarity.

From a “Resist This” press release:

Please arrive by 8am so that you have lots of time to get though security; don’t bring anything that they won’t let through; wear snazzy court support clothes if you have them (black if possible, but we’ll have black blazers to borrow for folks who want/need that to be able to ).

The jury will sit at 10:30am on Monday morning and we need everyone seated and situated long before then, because the judge will take the bench at 9:30am to handle preliminary matters. Ideally, we’d like to have the courtroom packed by then.

Expect a full day in court on Monday and Tuesday. Be prepared to listen attentively to the proceedings, to show love to our friends on trial (as they hear the government try to vilify them), and to show respect to the jurors.

The central utility of your presence in court is to provide loving support for the defendants. Being present in the courtroom space so that they are able to observe that loving support, and draw energy from it, is incredibly important.

They’re also offering tips on what not to do, which would have been far more useful before engaging in alleged illegal activity:

Please don’t do anything that could reflect poorly on our friends on trial, that could cause jurors to have an unfavorable view of them or of us, or say or do anything that could put you (or others) at risk. Whenever you are inside the courthouse (or in the immediate area out front), please assume that you are under surveillance, that the purpose of that surveillance is to gather evidence against our friends, and conduct yourself accordingly.

Obviously, you should avoid saying anything incriminating, but sharing any personal details at all about anyone has the potential to create/trigger unintended consequences.

Similarly, please don’t post anything on social media that could be damaging to any of the defendants. Boost @defendj20’s posts instead. And please direct all media inquiries to the media spokespeople who will be in court each day instead if doing interviews yourself.

Please be aware that the judge has issued very specific guidelines for decorum on this case. It is important that we follow these guidelines in order to avoid adverse outcomes, for those on trial and/or for the rest of us. The judge has ordered that there be no communication whatsoever to jurors.

Additionally, the judge has ordered that cameras/phones should not even be out anywhere on the second floor. Any violation of the judge’s orders (even courteous small talk to jurors) can result in criminal charges, such as contempt of court or jury tampering.

“Resist This” has been raising legal funds for those charged and begged for bail money when more than 200 arrests were made by local police 10 months ago.

During the inauguration, anarchists and anti-Trump agitators took to the streets to keep inauguration attendees from going through security, burned a limousine (which was owned by a Muslim immigrant), smashed a media truck and severely damaged a Bank of America and Starbucks while employees were working inside. Fires were also set in the streets.