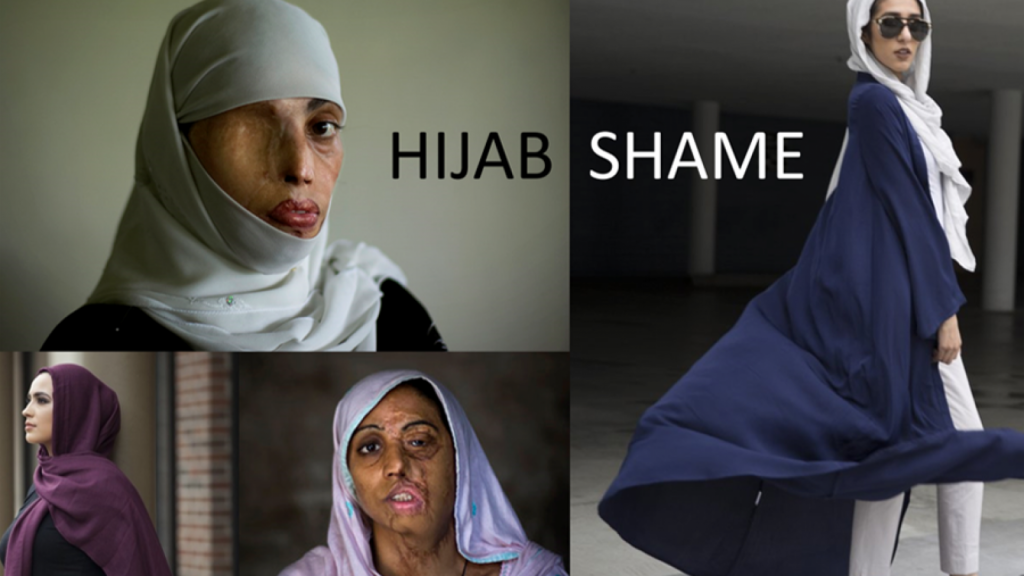 February 1st was the fifth World Hijab Day. Hijab is the Muslim headscarf that the media continually mischaracterize as merely a symbol of modesty in Islam. World Hijab Day was founded by New York activist Nazma Khanin in 2013 and is now celebrated in 140 countries. The stated goal is to foster religious tolerance and understanding by encouraging women of all religions to wear and experience hijab for one day. Put on a pretty head scarf and you too can enter a popular victim class. If you are really lucky you may be harassed and enjoy the full discrimination experience. Ironically, many of the same feminists who wore pussy hats at the Women’s March put on head scarves to stand in solidarity with their Muslim sisters. One month these feminist fashionistas are dressing up like giant vaginas and the next month celebrating their modesty. It would be much less confusing if these women would stop using headwear to symbolize their political positions. It makes you worry what else is in their clothes closet.

A few days later Macy’s announced a new clothing line for Muslim women making them the first major department store in the U.S. to sell hijabs. This is part of a new trend called Haute Hijab to glamorize and normalize the covering of women. In an interview with Fox News’ Tucker Carlson, Sonia Ossorio, President of the New York City chapter of the National Organization for Women, said that hijab was a symbol of empowerment and resistance against Donald Trump. Her statement was in reference to women who never wore hijab before who decided to wear it in protest of the travel ban. While deluded Western feminists are embracing the most recognizable symbol of institutional oppression, women in Iran are risking their lives waving and burning their head coverings in protest against the state-mandated law.

Sonia Ossorio and other so-called feminists interpret the wearing of hijab from their own cultural perspective as if all women wear it of their own free will. They do not understand that one of the fundamental reasons that women must be covered is that modesty is intrinsically intertwined with Islamic concepts of purity, honor and shame. These feminist fashionistas do not realize that no matter how pretty the hijab head scarf, it is essentially a prison uniform. It is used as a shaming mechanism to make women think their own bodies are the cause of male sexual urges, that they are a dirty impure unclean gender who must be hidden, cloistered, secluded and segregated so they do not entice or contaminate the community of men.

Sharia Islamic law requires the strict observance of purification rites that include everything from dietary laws, dress codes, sexual and other prohibitions. Most significantly, rites of purity function as ritualization, a form of repetitive symbolic conditioning. Ritualization is accomplished by designating natural bodily functions as intrinsically impure. The result of this process is that the human body is experienced as a source of shame, full of impurities that must be covered, concealed, and continuously purified. Due to menstruation women are inherently impure, hence polluted. If they are not covered and secluded their menstrual blood may contaminate the purity of the entire community. Once you convince an entire gender that they should be ashamed of their own bodily functions they can never become full members of society.

Not only are women considered unclean, they are viewed as explicitly sexual beings in which every part of their body is thought to be erotic. A woman’s entire body is viewed as private parts that must be covered. If you shake a woman’s hand it is the equivalent of touching her crotch. If a woman’s hair is displayed, it is the equivalent of exposing her pubic hair. Uncovered women are viewed as prostitutes and adulterers and the prevailing attitude is that if an uncovered woman is raped she asked for it. In September 2006 in a Ramadan sermon on adultery, Australia’s most senior Muslim cleric blamed immodestly dressed women who don’t wear hijab for being preyed on by men. Sheik Taj Din al-Hilali alluded to the infamous Sydney gang rapes in 2000, committed by a group of fourteen Lebanese Australian men, and suggested the attackers were not entirely to blame. Sheik Hilali said: “If you take out uncovered meat and place it outside on the street, or in the garden or in the park, or in the backyard without a cover, and the cats come and eat it … whose fault is it, the cats or the uncovered meat? The uncovered meat is the problem.”

The function of hijab is not simply protecting modesty, it also protects purity and family honor. Hijab needs to be understood in the context of honor shame cultures in which any violation brings dishonor to the family. Uncovered women signify immodesty or unfaithfulness which forfeits a woman’s honor and shames the men in the family. Breaking tradition has serious consequences and family members are obligated to restore honor and cleanse the family of the shame. Consequently, not wearing hijab has resulted in “honor violence.” Both Muslim and Western women have been the victims of beatings, rape, torture, disfigurement and death for not wearing hijab in Western and Middle East Countries. This violence is considered a justifiable method to punish and restore honor to the family who could not control their women.

In October 2017, a 35-year-old man was charged with assault, assault with a weapon, and uttering death threats in Gatineau city, Quebec for beating his teenage daughter for over a year for refusing to wear hijab. In November 2016 in Vienna, Austria, a 17-year-old girl was savagely beaten at a shopping center by a group of teenage girls and a boy who were part of a Sharia patrol. They shouted, “She has pulled the headscarf down, demolish her!” and then beat her until her jaw was broken in two places. On December 10, 2007, 16-year-old Aqsa Parvez was strangled to death by her brother in their Mississauga, Ontario, Canada home after she refused to wear the hijab. Her father and brother were sentenced to life in prison.

Women who do not wear hijab are perceived as responsible for their own beatings, rapes and deaths. One of the most disturbing examples of a gang rape occurred on February 11, 2011 detailed in my article The Semiotics of Honor Killing & Ritual Murder. When Egyptians were celebrating the resignation of Egyptian President Hosni Mubarak the blonde haired blue-eyed TV journalist Lara Logan who was reporting for CBS News was not wearing a headscarf. Being uncovered it was obvious that she was not an Egyptian Muslim woman, hence she was an open target. Logan was beaten, and gang raped by a crowd of three hundred men. YouTube and some Arab websites reported that at least six men raped her vaginally, and several men raped her anally. She was also masturbated and urinated on. There were reports that her left breast was bitten and that the entire left nipple was bitten off. In her one and only interview discussing the attack on 60 minutes Logan did not provide details of the sexual aspect of the assault but described how her clothes were ripped off, she was beaten with flagpoles and sticks, how the men tried to tear off chunks of her scalp and literally tried to tear the limbs from her body. From a Western perspective this was a crazed mob out of control. For a shame culture this was an acceptable punishment for a woman who was not properly covered. They pulled her blonde hair out and more than likely kept it as souvenirs.

Women who don’t wear hijab are not only raped, beaten, tortured and murdered many are deliberately disfigured.  Disfigurement and mutilation is even more common than rape as punishment for not wearing hijab. In Pakistan, Kashmir, and Afghanistan, hundreds of women have been blinded or maimed when acid was thrown on their unveiled faces by men who considered them improperly dressed.  Schoolgirls have also been the victims of acid attacks simply for attending school. If the women and girls survive the attacks they are permanently disfigured and often blinded from the hydrochloric or sulfuric acid. Throwing acid on the face, the only body part permitted to be viewed in public, is intended to socially stigmatize the women and send a message that they are of disrepute, bad character and outcasts who engaged in taboo conduct. Stigma and dishonor are both the intent and result of rape and acid attacks. It is a literal loss of face. Symbolically, mutilation is the archetypal sign of dishonor. From a strategic perspective a mutilated victim is forever stigmatized, a living personification of shame, a visible sign of dishonor and a political advertisement for Sharia law.

Muslim women who choose to wear hijab have internalized their own oppression. Western non-Muslim women who wear hijab have been indoctrinated into social justice myths of Islamophobia. World Hijab Day, founded by a Muslim activist/operative, is part of the stealth jihad strategy to slowly introduce Sharia law into Western culture. The president of the New York Chapter of the National Organization for Women thinks women should wear hijab as part of the resistance against President Trump. Macy’s, an American institution, is marketing garments of slavery and glamorizing the subjugation of women. Shame on everyone.