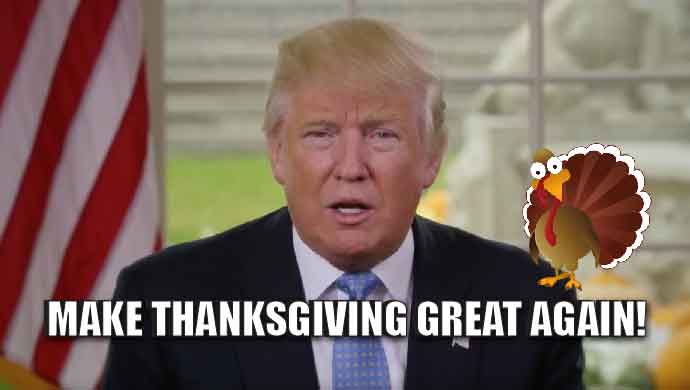 Sites are now issuing “survival guides” for the forthcoming holiday.

Thanksgiving is right around the corner, which means its time to start preparing for forced interactions with family members that you never see and probably don’t like — and leftists are in a panic at the mere thought of having to spend one meal in the same room as relatives who might have voted for Donald Trump.

Last year at this time, the Obama Administration was issuing memo after memo to Democrats, explaining to everyone from Millennials to union members, how to lecture on the topic of — err . . . make the case for — universal health care, while you had a captive audience gathered around the Thanksgiving turkey. The “talking points” ran the gamut from “obnoxiously out of touch” to “downright insulting to people who actually pay taxes.”

But this year, the same crowd is issuing survival guides for social justice warriors whose extended dinner table treatises failed to convince their blood relatives to select Hillary Clinton over Donald Trump.

Because, apparently, it’s simply not enough to just suck it up and stay silent on the subject of politics when in potentially mixed company, so that everyone enjoys a national holiday devoted to eating, shopping and football, like true Americans or, in the alternative, just cook your own turkey TV dinner in the microwave before sitting down to a solo Samantha Bee marathon.

Anyway, Salon.com and AlterNet are leading the pack offering these tips for dealing with your potentially racist, most definitely wrong, Trump-supporting elders:

1. Practice “Radical Empathy:” The progressive outlets suggest that college students and the more highly educated engage in the practice of listening intently to their relatives feelings, whilst nodding condescendingly, as if acknowledging that a three-year-old’s desire to be a fire truck when he or she grows up is a legitimate idea. This works especially well with closed-minded adults, the magazines claim, because nothing will make a Trump supporter more confident in their election choice, than a 26-year-old career academic pretending to listen to their concerns about the economy.

2. Bring up sensitive subjects at the most inopportune times: People crave debate, AlterNet says, so give it to them. While you’re passing the mashed potatoes, make sure you make your point about gun control.

3. See your relatives as people. This is a particularly good piece of advice, but one which Salon and AlterNet somehow manage to make into an insult.

When you start labeling people as an ideology, you’re not really seeing them as a person. Let’s face it, not every conservative voice is what they’ve been charged within the media, which is homophobic, racists, Islamophobic. That’s just not the case. There are narratives out there that are being missed, so you need to have an open mind.”
Who knows? Your aunt might not be a racist! It’s a definite possibility!

4. Understand that they may be “fearful” and “ignorant.” When the first caveman brought fire to his people, they probably recoiled in horror, right? Well, that’s how your plebeian relatives will likely react when you attempt to open their minds to the concept of social justice, and instill woke-ness within the very fiber of their being. They need to be approached carefully, because they spook easily, particularly when confronted with superior ideas which they just might not comprehend.

Conservative sites have yet to respond to the “survival guide,” but its entirely possible for even leftists to escape Thanksgiving unscathed — simply by not making every family gathering political. The less you talk about politics, the better you’ll feel — trust me. Try allowing the people in your life to just … have fun and eat good food and watch moderately dangerous sporting events in peace.

Everyone — everyone — will be happier.