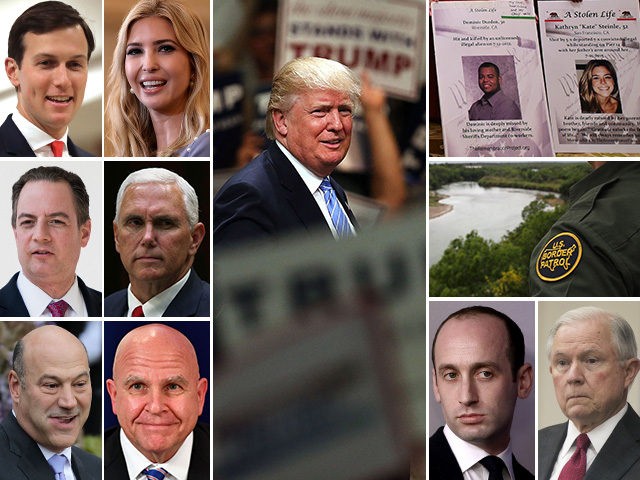 Anita Kumar writes at McClatchy DC that the moderate/globalist faction of the White House is pushing President Donald Trump toward an immigration “deal” that would reduce the president’s key campaign platform — a wall on the U.S.-Mexico border — to a “bargaining chip” for more amnesty.

Donald Trump’s top aides are pushing him to protect young people brought into the country illegally as children — and then use the issue as a bargaining chip for a larger immigration deal — despite the president’s campaign vow to deport so-called Dreamers.

The White House officials want Trump to strike an ambitious deal with Congress that offers Dreamers protection in exchange for legislation that pays for a border wall and more detention facilities, curbs legal immigration and implements E-verify, an online system that allows businesses to check immigration status, according to a half-dozen people familiar with situation, most involved with the negotiations.

The group includes former and current White House chiefs of staff, Reince Priebus and John Kelly, the president’s daughter, Ivanka Trump, and her husband, Jared Kushner, who both serve as presidential advisers, they said. Others who have not been as vocal publicly about their stance but are thought to agree include Vice President Mike Pence, who as a congressman worked on a failed immigration deal that called for citizenship, National Security Adviser H.R. McMaster and Gary Cohn, a Democrat who serves as director of the National Economic Council.

“They are holding this out as a bargaining chip for other things,” said Ira Mehlman, a spokesman with the Federation for American Reform, a group that opposes protecting Dreamers and is in talks with the administration.

On the other side, a smaller group — including Attorney General Jeff Sessions and his former aides, Stephen Miller, who serves as Trump’s senior policy adviser, and Rick Dearborn, White House deputy chief of staff — opposes citizenship, according to sources familiar with the discussions.