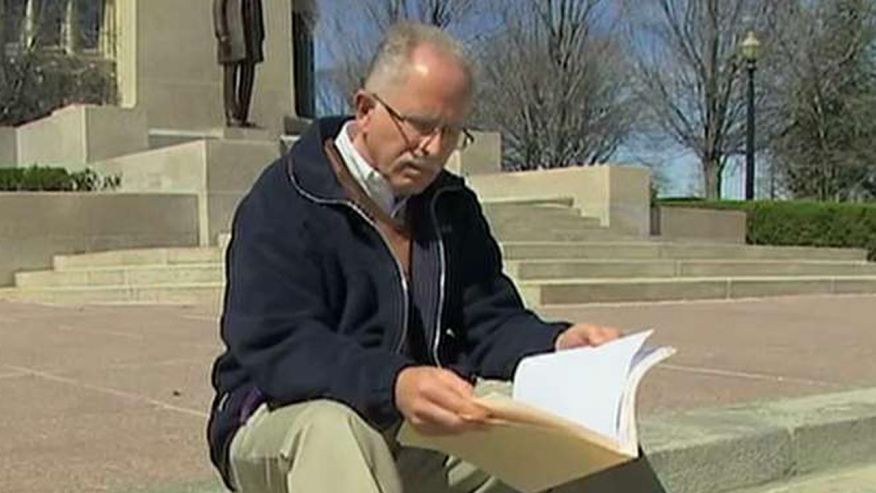 Mark Janus is at the center of a potentially historic Supreme Court case that has led to him being characterized as a billionaire union-buster, rather than the child support specialist who just wants to have a choice of whether or not to join a union.

After a hiatus from government employment to work in the private sector, Janus took a job as a child support specialist at the Illinois Department of Healthcare and Family Services. He noticed something had changed since his last stint in the public sector: His paycheck didn’t add up. He brought the deduction up with a superior.

“When I raised the question, they just said, ‘That’s the way it is now.’ That’s what kind of riled me up,” Janus recalls, adding that his previous work at the Commerce Department was non-union.

In his first interview since the Supreme Court announced it would take up Janus v. American Federation of State, County, and Municipal Employees Council 31, Janus stressed that he does not begrudge anyone union membership. He says he gets along with his coworkers and no one treats him any differently since he began the case.

“I’m definitely not anti-union. Unions have their place and many people like them. … I was never given a choice,” he said. “I really didn’t see that I was getting any benefit [from union membership]. I just don’t think I should be forced to pay a group for an association I don’t agree with—that goes to the First Amendment.”

Janus’s case could overturn a forty-year-old precedent first set in Abood v. Detroit Board of Education (1977) that allows government agencies to mandate union dues or agency fees as a condition of employment. AFSCME, which did not return multiple requests for comment about the case, has attempted to brand Janus and his lawyers as tools of Big Business and the billionaire class.

“The billionaires and corporate special interests funding this case view unions as a threat to their power, so they are trying to get the U.S. Supreme Court to rig the system even more in favor of those already at the top,” Council 31 said in a release after the Supreme Court granted cert in the case. “The forces behind this case know that by joining together in strong unions, working people have the voice they need to level the economic and political playing field.”

Janus was a full dues-paying member to the union for less than a year before he opted to become an agency fee payer, which allows him to pay solely for collective bargaining and other work-related expenses while not funding the union’s political activities.

The union spent about $3 million on political activities and $9.5 million on representational activities in 2016, according to its federal labor filings. Its 59,557 members paid dues ranging from $34.65 to $46.53 a month, helping to fuel $22 million in per capita fees from its local unions. Janus was one of 6,600 agency fee payers affiliated with the union.

He objects to those fees because he sees the union as inherently political, given the fact that its negotiations involve taxpayer dollars and the budgetary process in the deeply indebted state. He said 2016 exposed the political use of union dues.

“I saw an awful lot of union people coming in during lunch period in the office under the guise of recruiting members. Most of what I heard was extremely political,” he said of the union, which endorsed Hillary Clinton in March. “Even though they claim the agency fees are strictly to cover bargaining. … I see what they’re doing and their inherent political dealings, funneling money to campaigns and getting candidates elected.”

Abood has been seen as vulnerable since another Illinois resident, home healthcare aid Pamela Harris challenged the state policy of automatically deducting her son’s disability checks to pay union dues for the care she provided him. The Supreme Court ruled 5-4 that the arrangement first implemented by imprisoned Democratic Gov. Rod Blagojevich violated the Constitution. Justice Samuel Alito stopped short of overturning Abood, focusing instead on the fact that the home health aides, also known as personal assistants (PAs) did not meet the standard of actual public employees.

“PAs are much different from public employees,” the decision said. “Unlike full-fledged public employees, PAs are almost entirely answerable to the customers and not to the State, do not enjoy most of the rights and benefits that inure to state employees, and are not indemnified by the State for claims against them arising from actions taken during the course of their employment.”

The decision led California teacher Rebecca Friedrichs to challenge the entire forced dues system. The court deadlocked 4-4 on the case following the sudden death of Justice Antonin Scalia in February 2016, which allowed Abood to remain in place. Janus said he and two co-plaintiffs were motivated by Friedrichs’s willingness to challenge her union.

“Somebody’s got to do something,” he said. “I figure it’ll be a wake-up call to the union that they would have to provide a better benefit [to members].”

The other two plaintiffs have since been dropped from the case—one withdrew and the other was removed from the case by an appellate court because he had acknowledged union representation during administrative proceedings against the state. That leaves Janus as the last man standing, with the potential to have his name attached to a case that could change the landscape of public sector employment. Jacob Huebert, director of litigation at the Liberty Justice Center, which helped Janus bring the case, said Janus stands for all government workers.

“Mark is in the position to protect everyone’s interests,” he said. “If he wins then all workers will have the right to choose.”

Labor watchdogs see President Donald Trump’s appointment of Justice Neil Gorsuch as a potential winning vote for the movement to end coercive dues payments in the public sector. Patrick Semmens, spokesman for the National Right to Work Foundation, which also assisted on the case, pointed to comments from public sector labor giant Service Employees International Union (SEIU) that estimated as many as 65 percent of its members would be on the fence or opt out of paying dues if given the choice.

Janus does not see that doomsday scenario playing out, nor does he necessarily want it to happen. His focus is on winning the right to exercise the freedom of association.

“Unions will continue to collectively bargain. They will continue to represent those members that voluntarily join the union and choose to be represented,” he said. “The fact that they call this a ‘union-busting’ area is extremely off base.”

The Supreme Court will hear the case in its next session.