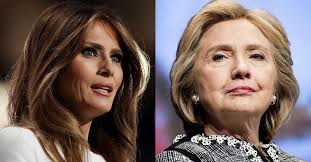 First Lady Melania Trump looked as stunning as ever during the State of the Union address.

While wearing an all-white suit, Melania took what some are considering a direct shot at twice-failed presidential candidate Hillary Clinton.

Melania Trump may have gotten the last laugh with her choice of attire for the State of the Union.