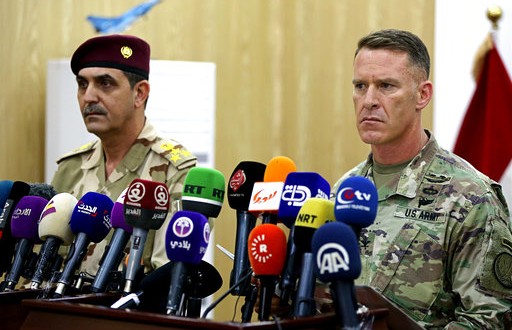 (CNSNews.com) – Three years of U.S.-supported fighting in Iraq and Syria has put ISIS “on the verge of a devastating defeat,” a U.S. military spokesman said on Tuesday.

Army Col. Ryan Dillon, the spokesman for the U.S.-led coalition, told a news conference that ISIS has been “beaten back” on all fronts.

“Our partners have removed ISIS from 87 percent of territory they once held, liberating more than 6-and-a-half million people,” Dillon said.

“Overall, ISIS is losing in every way. We’ve devastated their networks, targeted and eliminated their leaders at all levels. We’ve degraded their ability to finance their operations, cutting oil revenues by 90 percent. Their flow of foreign recruits has gone from about 1,500 fighters a month down to near zero today.”

“ISIS in Iraq and Syria are all but isolated in their quickly shrinking territory,” Dillon added.

He estimated that around 6,500 enemy forces remain in both Iraq and Syria, with “perhaps about 100” still hiding out in the Syrian city of Raqqa, which is 90 percent cleared.

On the question of who ultimately owns the Kurdish territory of Kirkuk, Dillon demurred: “I will let someone from the government of Iraq answer that question for you,” Dillon told the reporter. “We’re here to fight ISIS, and I told you, we’re not participating in or with any of the units that are in and around Kirkuk right now.”

U.S. allies, including Iraqi Shiites and Kurdish forces, are fighting for control of the disputed (and oil-rich) territory.

“These tensions distract from our unified fight against ISIS, which remains a very real threat in Iraq,” Dillon said.

In a statement issued Monday, the U.S. State Department said it is “very concerned” about reports of violence around Kirkuk.

“We strongly urge all parties to avoid provocations that can be exploited by Iraq’s enemies who are interested in fueling ethnic and sectarian conflict. In particular, we note that there is still much work to be done to defeat ISIS in Iraq, and continued tensions between Iraqi and Kurdish forces distract from this vital mission. The United States will continue to stand with our Iraqi partners to ensure ISIS’s defeat.”