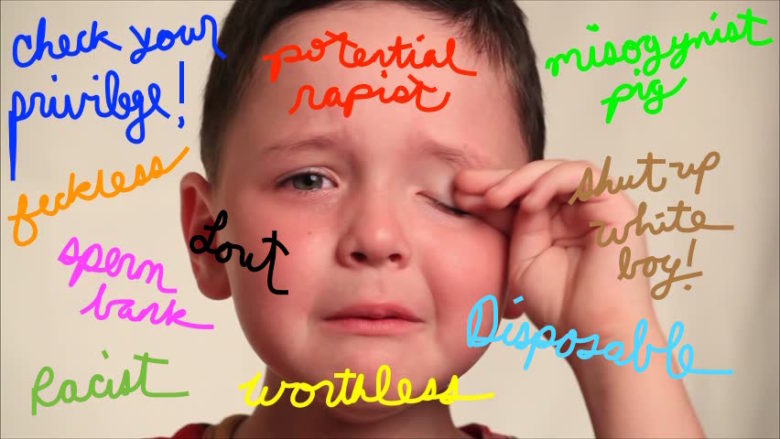 “Don’t vote for men!” is the message of a recent campaign ad. Issued by Dana Nessel, Democratic attorney general contender in Michigan, what she literally says is, “Who can you trust most not to show you their [sic] penis in a professional setting?”

She answers that it’s the candidate who doesn’t have one.

Now, a person could easily go tit for tat (not that I’d ever consider such a thing!). Noting how some voters, addressing politicians’ pusillanimity, lament how we need leaders with “a pair,” one could ask “Who can you trust most to have a pair?” and answer “The candidate who by definition has one.”

But the anti-male bias animating Nessel has long been brewing. In 2004, Sweden’s Left Party (yeah, that’s its actual name) proposed a “Man Tax,” a special levy on men designed to compensate society for the cost of male violence. I always answer that I’ll be happy to pay my man tax — as long as I also get royalties for all of history’s man-birthed inventions and innovations. I’ll then use what’s left over to self-fund a presidential run.

Of course, responding to Nessel’s claim that sexual misconduct is a male domain, we could highlight the continual stories about female teachers having relations with young male students or the NYC juvenile-detention center where female guards were allegedly using the teen boy inmates as “sex slaves.” And man-tax misandrists should note that women are actually more likely than men to initiate domestic violence.

Yet, in reality, sound bites and simple facts don’t truly illuminate this issue. For there is some truth in Nessel’s nitwittedness, man-tax twittering and in my responses to both.

USA Today recently ran the headline, “’Guns don’t kill people; men and boys kill people,’ experts say,” which is about as insightful as stating “Men are taller than women.” Of course, even though blacks and Hispanics commit 98 percent of all gun crime in NYC, we’d never see the headline “Big Apple Crime: Guns don’t kill people; blacks and Hispanics kill people, experts say.” That said, it’s always been known that men commit the bulk of major violence; it’s also not news that men are the more lustful sex and are more likely to commit sexual misconduct.

Yet crime doesn’t completely tell the tale — because the sexes sin differently. Consider: When a little boy gets upset, he may have a temper tantrum and explode like a volcano, creating quite a scene. Yet 10 minutes later he may act as if the event never happened. A little girl is more likely to not boil over but simmer for a long time, even perhaps holding a grudge. Thus, the amount of negative energy expended may be the same; only the intensity and duration vary. But which trespass is far more likely to bring punishment?

This is evident throughout life: Men’s sins are more overt, women’s more covert. Boys are more prone to get into fistfights, but girls may be more apt to bully peers to the point of suicide. In this case, the trespass more likely to bring punishment is the less severe.

And so it goes. Male violence is matched by female emotional manipulation and vindictiveness; male lust by female vanity; male gluttony, sloth and anger by female pride, envy and avarice. (Yes, there is overlap; I’m speaking of characteristic faults.)

However visible men’s sins, though, they are today, as they’ve always been, recognized. What’s new is that while men are, again, virtually all history’s inventors and innovators, this is minimized. Men’s faults are now treated as innate — or, at best, as a function of deeply ingrained “toxic masculinity” — while their triumphs are written off as nurture, the result of mere opportunity.

Feminist Camille Paglia once noted, “If civilization had been left in female hands, we would still be living in grass huts” (a naturally imposed grass ceiling?). Paglia was getting at an age-old truth: Men are the actuating sex, the wilder one, which accounts for both their dynamism and their dangerousness. They’re two sides of the same coin, giving men the capacity to be a Churchill or a Hitler, to write the Communist Manifesto or the Constitution. Yes, most murdered women are killed by men, but women only now outlive men (they once died younger) because of male-born medical science. Men have been killers — but many more lives have been saved because they’ve also been curers.

There are two reasons, one more politically incorrect than the other, why men are the groundbreakers: inclination and ability. Ivanka Trump has been on a crusade to get women into scientific and high-tech fields. She ought to watch the excellent documentary “The Gender Equality Paradox,” which points out that women are more likely to enter non-traditional fields (e.g., computer tech) in relatively patriarchal India than in über-egalitarian Norway. Why? Because India’s poverty forces women to go where the money is; in rich nations, however, they can afford to follow their hearts. As for where this takes them, there’s a reason boys would play with erector sets and girls with dolls — and, no, it’s not conditioning.

Dr. Larry Summers lost his job as Harvard University’s president in 2006 for saying that there may be few women in top science positions because of “issues of intrinsic aptitude.” When analyzing this, one could point out (not that I’d ever consider such a thing) that, contrary to popular myth, men have somewhat higher IQs than women do (and brains approximately 11 percent larger). Moreover, the gap in intrinsic scientific aptitude is likely even greater than that I.Q. gap of five points would indicate.

Yet none of this matters. You see, it isn’t the average person, or even the average intelligent person, who makes the great breakthroughs. It is the genius, the fantastically gifted.

And such people are virtually always male.

For example, “[A]t the near-genius level (an IQ of 145), brilliant men outnumber brilliant women by 8 to one,” wrote Professor Richard Lynn in 2010. Of course, the ratio varies depending on what data you use, but the pattern is unmistakable, consistent and finds no disagreement among experts: As you move up the I.Q. scale, the ratio becomes more skewed in men’s favor until (according to the study here) the category “I.Q. over 176,” where there is no ratio — because no woman scored that high.

Why this disparity? I’d theorize that it’s for the same reason why males are more likely to develop X-linked chromosomal abnormalities (such as color-blindness or hemophilia): because, to put it simply, the Y (male) chromosome increases the chances of anomalies’ emergence. And, well, genius is an anomaly.

Of course, this phenomenon would apply to other abilities as well, whether in music, art, athletics, cooking, chess, writing or, well, most anything else under the sun.

This is why virtually all history’s inventors and innovators have been men. It’s why, barring some bizarre, nature-rending genetic engineering (which would also be birthed by men), they always will be.

What implications does this hold for society and policy? First, it’s a fool’s errand and highly destructive to try to equalize the number of men and women in the STEM fields. After all, if we ever instituted what the Bill Clinton administration desired — applying Title IX “proportionality” mandates to STEM — it would not magically breed female geniuses or even spark women’s interest in STEM.

But it might result in denying some brilliant men the opportunity to exploit their potential.

Now, China already produces 10 times as many scientists as we do (with just four times the population). Do we want to make that ratio 20 to 1? Thirty to one? Then just keep it up with the political correctness.

Second, as wise parents have always understood, boys must be given outlets for their boundless energy. As someone I knew once put it, “Boys always have to be doing something — even if it’s the wrong thing.” It will more likely be the wrong thing (e.g., gangs) if we rob them of right things, which is what happens when in the name Equality™ we remove their necessary outlets (e.g., applying Title IX and eliminating boys’ athletic opportunities).

Remember, again, the choice is dynamism or dangerousness, whether that dangerousness is violence or the self-destructiveness of drinking or drugs. The same thing causing little boys to explore, sometimes where they shouldn’t, motivates them to later explore all manner of arenas, pushing back frontiers in science and medicine, creating and innovating, building and breaking through. Active little boys become actuating grown men, for genius without impetus goes as far as an engine without fuel.

Returning to anti-male insanity, years ago feminists in Sweden, Germany and Australia adopted a new cause — compelling men to sit down while urinating — and did succeed in getting the urinals removed from a Swedish elementary school. They claimed that the typical way men tend to a nature call is symbolic of, as Dr. Walter E. Williams related it, “triumphing in their masculinity.” Of course, it’s triumphant masculinity that created the whole modern world and that made arguments over urination technique possible. Because, yeah, men invented the flush toilet, too.

Speaking of which, that’s precisely where feminism and equality dogma ought to be put.

(First reported by Selwyn Duke and published by the American Thinker)  http://www.americanthinker.com/articles/2017/12/misandry_rises_in_defense_of_men.html  (December 13, 2017)