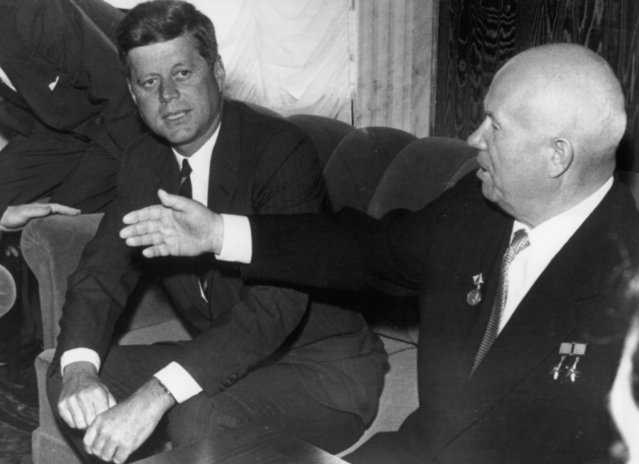 Russian interference in the 2016 US elections should come as no surprise. Moscow, both under Soviet and neo-Soviet (Putinist) rule, has attempted to influence US elections since the 1920s – usually on the Democratic Party side.

The Soviets historically used the communist-controlled unions and co-opted journalists as the means to manipulate elections. Currently, the Soviets use their old tactics in addition to manipulate social media outlets such as Facebook and Twitter. 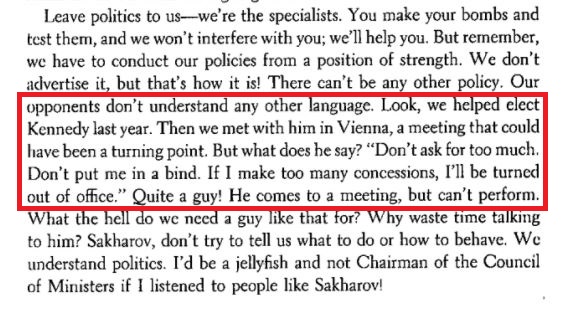 This is credible, because the pro-Soviet, communist-controlled US labor unions, especially in Chicago, supported Kennedy and he won that election by an incredibly narrow margin – with allegations of widespread voter fraud in Illinois’ Cook County.

According to Sakharov, Kruschev also expressed disgust that when the Soviets met with Kennedy after the elections in Vienna, they did not get the concessions they had hoped for.

“President John F. Kennedy and Soviet Premier Nikita Khrushchev met in Vienna for a two-day summit. In a letter delivered to Khrushchev in March, Kennedy proposed the two leaders meet for an informal exchange of views. Accordingly, they conferred without a set agenda.

Subsequent accounts, including Kennedy’s, confirmed that the summit did not go well. Khrushchev took a particularly harsh stance over Berlin, a Western enclave within communist-controlled East Germany, where the United States, Britain and France had maintained a symbolic military presence since the German defeat in World War II.

In addition to Berlin, Kennedy later told reporters, Khrushchev had berated him on a wide range of Cold War issues, including ‘wars of national liberation’ and nuclear weapons.

After Kennedy was assassinated, the Soviets worked to elect his successor Lyndon Johnson in 1964. Johnson (who had worked under Communist Party member Aubrey Williams in the Roosevelt-era National Youth Administration) beat conservative Barry Goldwater by a wide margin.

By 1960, Chicago Communist Party member David Canter (who had been raised in the Soviet Union) had teamed up with another well known Chicago Communist Party USA member, LeRoy Wolins. The pair owned a company called Translation World Publishers, which specialized in publications from and about the Soviet Union. The company soon attracted the attention of the House Un-American Activities Committee (HUAC), which suspected Canter and Wolins of being conduits for Soviet propaganda.

From the HUAC report: “Communist outlets for the distribution of Soviet propaganda” recorded hearings dated May 9, 10 & 17 and July 12, 1962: 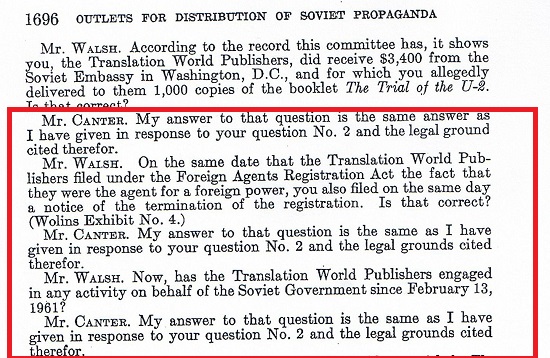 In their 1989 book, “The KGB Against the Main Enemy: How the Soviet Intelligence Service Operates Against the United States,” the US’ premier communist researcher Herbert Romerstein and former KGB officer Stanislav Levchenko examined Soviet attempts to blacken Goldwater’s name:

The false charge that Goldwater was a racist was only one of the smear campaigns used against his candidacy by the Soviets and their surrogates. The American Communists covertly covertly assisted in this “active measures” campaign.

A 1963 booklet claimed that Goldwater was conspiring with the John Birch Society to organize a “putsch,” or violent insurrection, to take over the United States in 1964. The booklet, “Birch Putsch Plans for 1964”, contained no address for the publisher, Domino Publications. The author used the not-very imaginative pseudonym, “John Smith, as told to Stanhope T. McReady.” There was nothing to tie this publication to the communists until an ad for the book appeared in the pro-communist National Guardian for April 25, 1963, listing the publisher as “Domino Publications, Suite 900, 22 West Madison Street, Chicago, Illinois.”

This was in fact the address of Translation World Publishers, which was registered under the Foreign Agents Registration Act as an agent of the Soviet Union. The co-owners, LeRoy Wolins and David S. Canter, were identified by the House Committee on Un-American Activities as members of the Communist Party USA.

David Canter was the mentor of a young journalist who later became a high level political consultant. His name was David Axelrod. Coincidentally, Axelrod’s mother Myril Axelrod had once worked for another Communist Party-influenced propaganda publication PM, out of New York.

David Axelrod learned well from David Canter, winning several important election campaigns often by blackening the names of his client’s opponents. That’s essentially how David Axelrod got his most important client Barack Obama elected, first to the US Senate, then to the White House.

As in days of old, the still-to-this-day loyal-to-Moscow Communist Party USA helped out. Communists were active in Obama’s Senate and both Presidential campaigns. In an October 23, 2007 report to a Chicago Special District Meeting on African American Equality, Communist Party USA National Board member John Bachtell wrote:

This was also reflected in the historic election of Barack Obama. Our Party actively supported Obama during the primary election. Once again Obama’s campaign reflected the electoral voting unity of the African American community, but also the alliances built with several key trade unions, and forces in the Latino and white communities.

I was really active in both Obama campaigns. Actually I was his precinct captain for his Senate campaign in Illinois.

“The left can and should advance its own views and disagree with the Obama administration without being disagreeable. Its tone should be respectful. We are speaking to a friend.”

And who can forget what a friend President Obama once was to Moscow?

Hillary Clinton‘s involvement in the Uranium One scandal was not her family’s first connection to Moscow. Not long after Bill Clinton became President, he flew to Moscow on Air Force One to meet Boris Yeltsin. Then, on his return flight, he had the plane stop in Prague, Czech Republic.

There he visited the Golden Tiger, a Prague pub. The Czech President had arranged a reunion between the US President and the parents of Bill Clinton’s now-deceased Oxford classmate Jan Kopold.

The frail, white-haired woman across the table from Mr Clinton at the pub on Tuesday night was Jirina Kopold, who met her son Jan Kopold’s American friend when he visited Prague after a visit to the Soviet Union in 1970.

For a week in January 1970, the bearded Arkansan, unable to find a cheap hotel, stayed in Jirina and Bedrich Kopold’s flat. Jirina’s mother, Marie Svernoa, a founder of the Communist Party in Czechoslovakia, gave young Bill a tour of the city…

Even in 1970, Clinton seemed to be considering a career in politics: ‘We often discussed how to help Czechoslovakia out of its terrible situation,’ Bedrich Kopold recalled.

‘One day we walked past the American Embassy and I said to Bill, ‘Some day you will come back as ambassador or cultural attache,’ and I laughed. Bill looked at me very seriously and said he well might,’ Kopold continued.

Looking at the thank-you notes Clinton and his mother Virginia had written the Kopolds, Jirina said: ‘I hope Bill Clinton wins. He was such a fine young man.’

It is likely that every Democratic Party President from Roosevelt onwards has been helped into power, or influenced in significant ways, by Moscow or its agents.