Who is “Elizabeth Carlisle” and why are her Department of Justice emails signed “AG”?

The American Center for Law and Justice filed an Open Records request with the agency, seeking documents related to Attorney General Loretta Lynch’s mysterious airport tarmac meeting with Bill Clinton during the election.

We have just obtained hundreds of pages in our ongoing investigation and federal lawsuit on former Attorney General Loretta Lynch’s tarmac meeting with former President Bill Clinton while the Department of Justice (DOJ) and FBI had an ongoing criminal investigation into Hillary Clinton’s emails. The results are shocking.

First, the Comey FBI lied to us. Last July, we sent FOIA requests to both the Comey FBI and the Lynch DOJ asking for any documents related to the Clinton Lynch plane meeting. The FBI, under the then directorship of James Comey, replied that “No records responsive to your request were located.”

The documents we received today from the Department of Justice include several emails from the FBI to DOJ officials concerning the meeting.  One with the subject line “FLAG” was correspondence between FBI officials (Richard Quinn, FBI Media/Investigative Publicity, and Michael Kortan) and DOJ officials concerning “flag[ing] a story . . . about a casual, unscheduled meeting between former president Bill Clinton and the AG.” The DOJ official instructs the FBI to “let me know if you get any questions about this” and provides “[o]ur talkers [DOJ talking points] on this”. The talking points, however are redacted.

One email, sent among DOJ employees, shows an email sent to “Elizabeth Carlisle,” but in the body of the email, it is addressed to “AG Lynch”:

In the response, the person sending from the “Elizabeth Carlisle” address signs the email “AG”, who wrote, “Thanks to all who worked on this,” referring to a statement that was issued regarding the tarmac meeting with the husband of the person being investigated by the FBI. 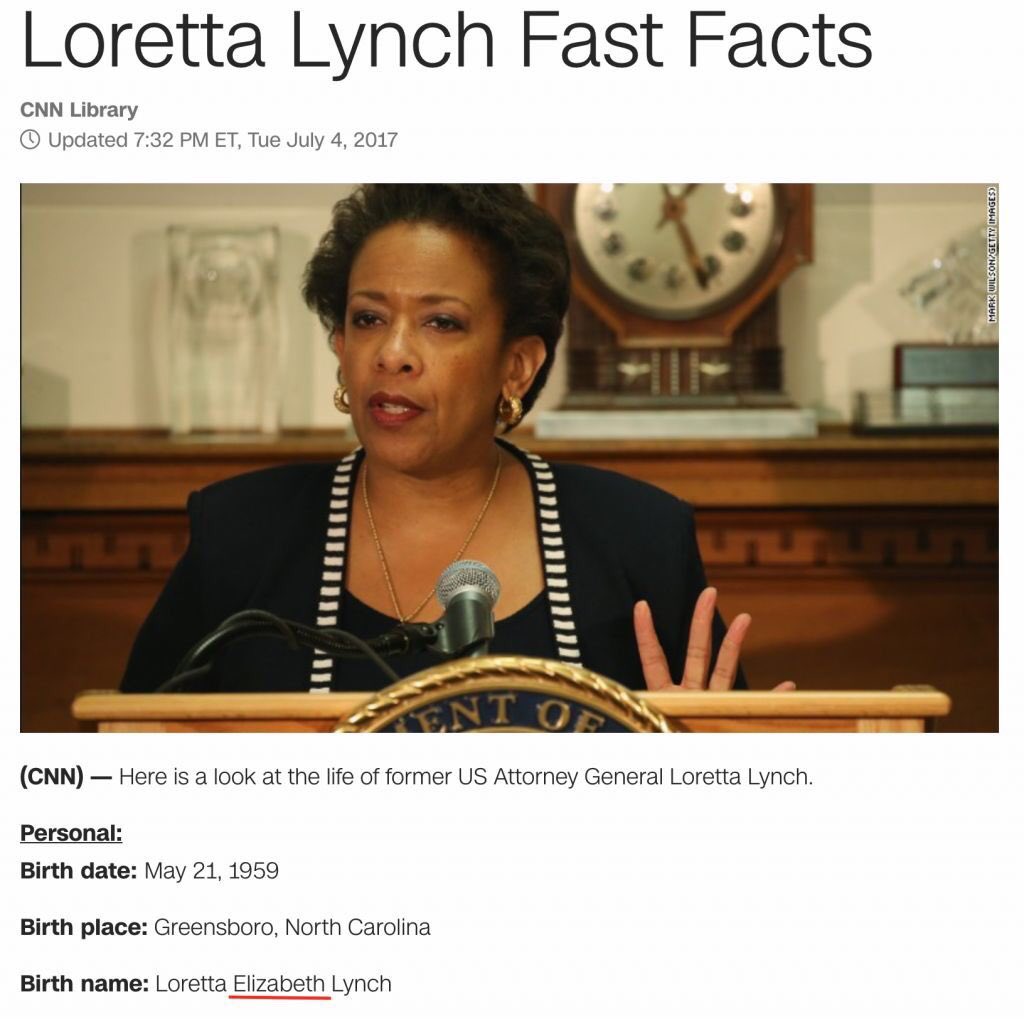 If Lynch did indeed use an alias, it wouldn’t be the first time such a thing was done among Obama appointees.

The Washington Times reported in 2013:

Richard Windsor never existed at the EPA, but the agency awarded the fictional staffer’s email account certificates proving he had mastered all of the agency’s technology training — including declaring him a “scholar of ethical behavior,” according to documents disclosed late last week.

Windsor.Richard@epa.gov was the controversial email alias used by former Environmental Protection Agency Administrator Lisa Jackson, who resigned earlier this year amid questions about whether her agency was complying with open-records laws.

The new records — the latest in a series that EPA critics have pried loose under open-records requests — suggests Ms. Jackson used the alias even more widely than known, including taking required agency computer training under the fake identity.

EPA officials say there’s nothing unusual in that, since Ms. Jackson used the alternate address regularly to conduct agency business.

The reportedly was no DOJ employee by the name of “Elizabeth Carlisle” during the Obama administration.