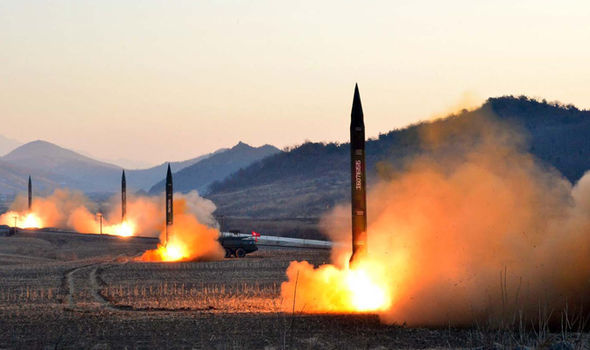 (CNSNews.com) – North Korea on Tuesday threatened to target “areas around Guam” with ballistic missiles, in response to the deployment of Guam-based supersonic U.S. Air Force bombers for combined exercises with South Korean warplanes.

The threat from a spokesman for the Strategic Force of the Korean People’s Army (KPA) came on the same day President Trump warned that Pyongyang’s threats “will be met with fire and fury, like the world has never seen.”

The KPA spokesman said in a statement it was “carefully examining” a recommendation by Kim Jong-un for “a powerful and effective action plan for containing the U.S. imperialists’ aggression hardware.”

The spokesman cited two U.S. actions – the test-firing last week of an unarmed Minuteman III intercontinental ballistic missile (ICBM) from Vandenberg Air Force Base in California, and the appearance of B1-B Lancer bombers – or what the spokesman called “the air pirates of Guam” – in the skies over South Korea.

“The KPA Strategic Force is now carefully examining the operational plan for making an enveloping fire at the areas around Guam with medium-to-long-range strategic ballistic rocket Hwasong-12,” the spokesman said in the statement, released by the regime’s KCNA news agency.

The aim, he continued, was “to contain the U.S. major military bases on Guam including the Anderson Air Force Base, in which the U.S. strategic bombers, which get on the nerves of the DPRK and threaten and blackmail it through their frequent visits to the sky above south Korea, are stationed and to send a serious warning signal to the U.S.”

The Democratic People’s Republic of Korea (DPRK) is the Stalinist state’s formal name.

It was from Andersen AFB that two B1-B bombers flew on Monday in a 10-hour mission that included flying with Japanese F-2 fighters in Japanese airspace, and then with South Korean F-15 fighters in that country’s airspace.

“As demonstrated today, our air forces stand combat-ready to deliver airpower when called upon,” said Lt. Col. Daniel Diehl, commander of the 37th Expeditionary Bomb Squadron after the exercise.

“The U.S. has maintained a regular bomber presence in the Indo-Asia-Pacific since 2004 and this mission demonstrated our continued ironclad commitment to regional allies,” U.S. Pacific Command said in a statement. “Further, it increased our readiness and exercised our rights under international law to fly legally in the place and time of our choosing.”

Monday was the third time in a month that the strategic bombers have carried out “solidarity” exercises with Japanese and South Korean fighter jets over those countries. Along with the U.S. itself, the two allies are frequently targets of Pyongyang’s threatening rhetoric.

The KPA spokesman said the Minuteman ICBM test-launch and the mobilization of “nuclear strategic bombers” from Guam indicated that the U.S. was “driving the regional situation to an extreme pitch.”

“This grave situation requires the KPA to closely watch Guam, the outpost and beachhead for invading the DPRK, and necessarily take practical actions of significance to neutralize it.”

“The execution of this plan will offer an occasion for the Yankees to be the first to experience the might of the strategic weapons of the DPRK closest,” the spokesman said.

On Tuesday, the Washington Post reported that a confidential Defense Intelligence Agency analysis has assessed that “North Korean has successfully produced a miniaturized nuclear warhead that can fit inside its missiles.”

Lying roughly 2,000 miles southeast of North Korea, Guam is about three times the size of Washington DC and has a population of 178,000 people.

It is home to 6,000 U.S. military personnel, a number expected to almost double when thousands of U.S. Marines move there from Japan, under a delayed bilateral agreement aimed at reducing the U.S. military footprint on southern island of Okinawa.

Guam has since 2013 been home to the only Terminal High Altitude Area Defense System (THAAD) system to be permanently stationed on U.S. territory.

According to the Pentagon’s Missile Defense Agency, the missile defense system, which entails a tracking radar, launcher, interceptor missiles and an integrated fire-control system, has a 14 out of 14 test intercept success rate since 2006.

Guam’s congressional delegate, Madeleine Bordallo, in a statement Tuesday the latest reports on North Korea were “deeply troubling” but that she remains “confident that Guam remains safe and protected.”

Guam’s homeland security advisor, George Charfauros, said the situation was being closely monitored but that there was “no imminent threat to the safety of the residents and visitors of Guam and the CNMI [Commonwealth of the Northern Mariana Islands] at this time.”

“As of this [Wednesday] morning, we have not changed our stance in confidence that the U.S. Department of Defense is monitoring this situation very closely and is maintaining a condition of readiness, daily,” he said.

“We will continue to keep the public updated on any changes or requests for action. For now, we advise the community to remain calm, remember that there are defenses in place for threats such as North Korea and to continue to remain prepared for all hazards.” 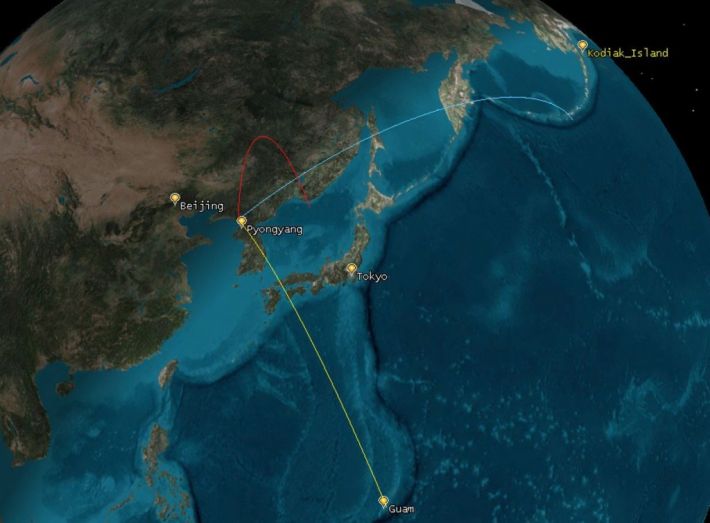 North Korea has test-fired two ICBMs since early July. The missile cited by the KPA spokesman, Hwasong-12, is a liquid-fueled, intermediate-range missile that was first successfully tested on May 13 this year (after at least three earlier failed attempts), according to the Center for Strategic and International Studies (CSIS) missile defense project.

“This trajectory indicates that the missile could have flown around 4,500 km [2,796 miles] if fired on a range-maximizing ballistic trajectory,” CSIS says.

“This range would put the U.S. territory of Guam and the far western tip of the Aleutian Islands chain within reach,” it said, but cautioned that range estimates would depend on the weight of the payload.