Nellie Ohr admitted to lawmakers that she would have been “less comfortable” doing oppo research that would have harmed Hillary Clinton.

“I would probably have been less comfortable doing opposition research that would have gone against Hillary Clinton,” Nellie Ohr said.

“And why is that?” a congressional aide asked Nellie Ohr.

“Because I favored Hillary Clinton as a presidential candidate,” said Nellie Ohr. 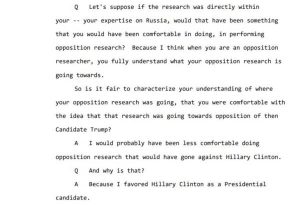