Last week, Big League Politics exposed how former President Barack Obama is in advance negotiations with video streaming service Netflix to have his own show. In response, Trump supporters across the country began boycotting Netflix by canceling their memberships. 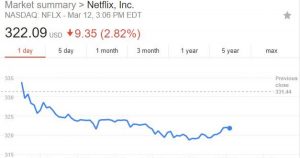 Just days into the boycott Netflix is already feeling the heat. Their stock has been steadily lowering in price since the boycott began. Just today the stock has dropped nearly 3% in value. As of press time, it’s down &9.35.

Since Christmas, the stock has been steadily climbing, leading to investment publications to praise the company, stating that their stock is “on fire.” On Christmas day, the Netflix stock was priced at $191, and just last week it topped off at $331.

That was just before it came out that Barack Obama was in talks with Netflix to have a show for himself, and another for his wife, Michelle. After that announcement, the stock took a hit, seeing its first major dip in price since the beginning of February, where they quickly recovered.

If this boycott continues, and intensifies, it could mean bad news for the company. It is especially hurtful for Netflix considering there are rumors that Apple is considering buying the company. A drop in stock prices could lead towards concern with a potential buyer.