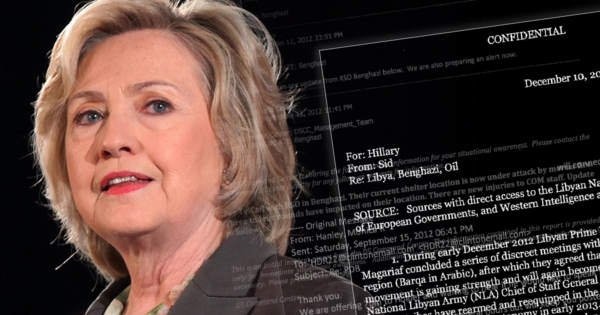 Despite overwhelming evidence of Hillary Clinton mishandling classified information, the FBI and Department of Justice refuse to prosecute the former Secretary of State. As The Gateway Pundit previously reported, former FBI Director James Comey drafted a memo exonerating Clinton before the Bureau’s investigation was complete.

In a new report, Judicial Watch has uncovered additional examples of Clinton and her aide, Huma Abedin, mishandling classified information through email.

According to Judicial Watch:

[…]The State Department produced many more Clinton and Abedin unsecured emails that were classified:

On March 8, 2009, Clinton sent classified information using her unsecure hdr22@clintonmail.com account.  She forwarded to former Senator George Mitchell an email from Tony Blair relating to Palestine. The email had been sent to her at hr15@att.blackberry.net. Clinton responded to Blair, saying she had forwarded the email to Mitchell. A former Senate majority leader, Mitchell was serving as Special Envoy for Middle East Peace.

On June 18, 2009, Abedin sent classified information summarizing a June 18, 2009, “Middle East Breakfast” meeting between various senators, representatives and State Department officials, at which Deputy Secretary Jack Lew and George Mitchell briefed the congressmen with “an update on our discussions with the [Middle East] parties.”

On June 23, 2009, U.S. diplomat Martin Indyk, who had his security clearance suspended in 2000 for “possible sloppiness” in the handling of classified information, sent a memo containing classified information to Abedin’s unsecure email account.  The memo, written for Clinton, pertained to Indyk’s discussions with top Israeli officials:

On August 1, 2009, Abedin forwarded classified information from State Department official Richard Verma to her unsecure email account.  The email from Senator Russ Feingold was sent to Hillary Clinton regarding her upcoming Africa trip.

In doing so, he overruled objections by the Trump administration that had insisted making the information public would violate grand jury secrecy rules.

“After reviewing the document in camera, the court concludes that it largely rehashes information already made public, thus obviating any need for secrecy,” the judge said.

President of Judicial Watch, Tom Fitton released a statement regarding this ruling:

We’re happy with the ruling but it is unbelievable we’re being opposed by Trump appointees in the State and Justice Department’s on the Clinton email issue.  President Trump ought to be outraged his appointees are protecting Hillary Clinton. The State Department should initiate action with the Justice Department – and both agencies should finally take the necessary steps to recover all the government emails Hillary Clinton unlawfully removed.

Cheryl Casone brought up the report about Comey drafting up a letter to exonerate Hillary Clinton before the investigation was even over yet there are certain people in D.C. who have it out for Trump.

“It explains why they were handing out immunity agreements like candy because it was a make believe investigation at that point because like Alice in Wonderland, Comey had come to his decision and the investigation would follow,” Fitton explained.