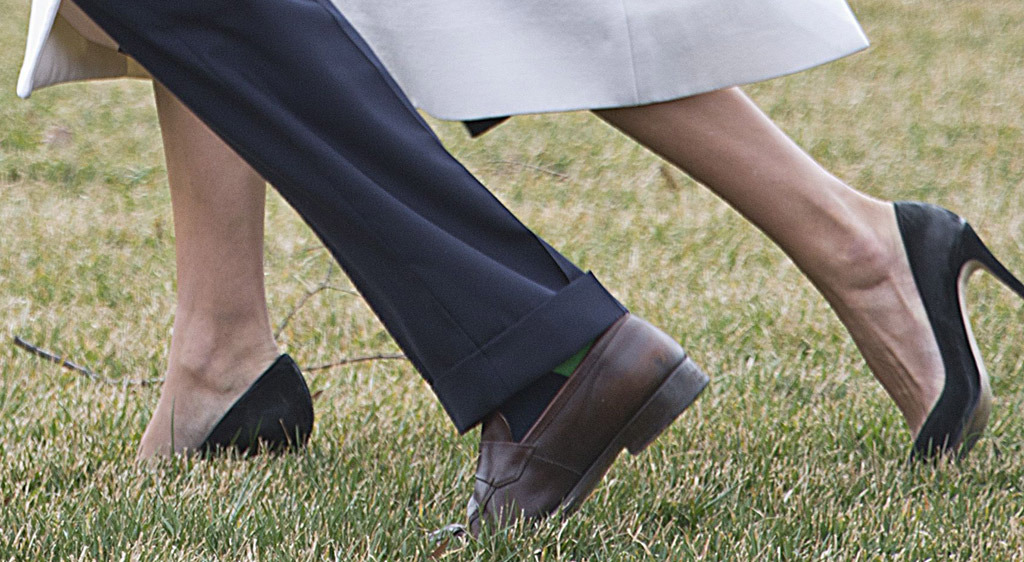 Newsweek reported Thursday on the fashion preferences of Melania and Ivanka Trump criticizing, in particular, their shoe of choice, the high heel. According to Newsweek, stiletto pumps “signal the taut combination of power and weakness that conservative women must cultivate in order to survive among ideologues who are crafting our tax-free ‘Handmaid’s Tale’ future.”

Newsweek calls the ubiquitous heels a “minor Trumpian trend,” asserting that the shoes are not currently in fashion, “but for Ivana, Ivanka, Melania and the Trump daughters-in-law, Carrie Bradshaw’s shoe of choice never went out of style.”

“In fact,” Newsweek’s National Politics Correspondent Nina Burleigh writes, “the female consorts of the Leader of the Free World do not set foot in public without first molding their arches into the supranatural curve that Mattel toy designers once devised for Barbie’s plastic feet.”

Burleigh claims that “the Trump women are well on their way to normalizing the footwear of the beauty pageant” footwear that “average women can bear for only a few hours at weddings or proms, before casting them off, moaning and rubbing their soles.”

Former Vogue editor Andre Leon Talley, described by Burleigh as a “longtime friend” of Melania’s, said that “other than the White House Easter Egg hunt on the lawn, Melania has not been photographed as first lady without her feet arched into one of two brands of towering high-heeled shoes that she favors, Manolo Blahniks or the 4.5-inch-heeled Oh So Kate by Christian Louboutin.”

A quick Google search turns up a couple of other occasions when Melania was photographed in flats, at Camp David and meeting with the Japenese Prime Minister’s wife.

Talley used to be close to the First Lady but announced in December that he would no longer dress her and has “made my choice not to be part of Trumpland.”

Burleigh’s in-depth analysis of the Trump women’s footwear includes some research by British psychologist Paul Morris who argues that heels are “supernormal stimuli.”

“In terms of the human example, we tend to find the defining characteristics of the opposite sex attractive,” Morris wrote. “High heels function in a similar way. Males respond to the characteristic way a woman walks, i.e., the movement of the female pelvis: High heels just exaggerate the femaleness of the walk.

“So to deconstruct why Trump women wear high heels: They are just buying into traditional binary views of male and female,” he concludes.

American anthropologist and author Helen Fisher told Burleigh heels “thrust out the buttocks and arch the back into a natural mammalian courting—actually, copulatory—pose called ‘lordosis.’ Rats do it, sheep do it…lions do it, dogs do it. It is a naturally sexy posture that men immediately see as sexual readiness. [Heels] are a ‘come-hither’ signal.”

Fisher believes “heels detract from women’s power, and shouldn’t be worn at work,” saying, “When women wear high heels at work, they send sexual signals that should be avoided if they want to be taken seriously.”

She concludes that feminists have “long grappled with the high-heeled shoe, and whether the stiletto telegraphs power (sexual or otherwise) or self-hobbled weakness. Stiletto pumps are the ultimate test of a certain type of femininity. They signal the taut combination of power and weakness that conservative women must cultivate in order to survive among ideologues who are crafting our tax-free ‘Handmaid’s Tale’ future.”

Plenty of women on Twitter had a few things to say about this analysis.