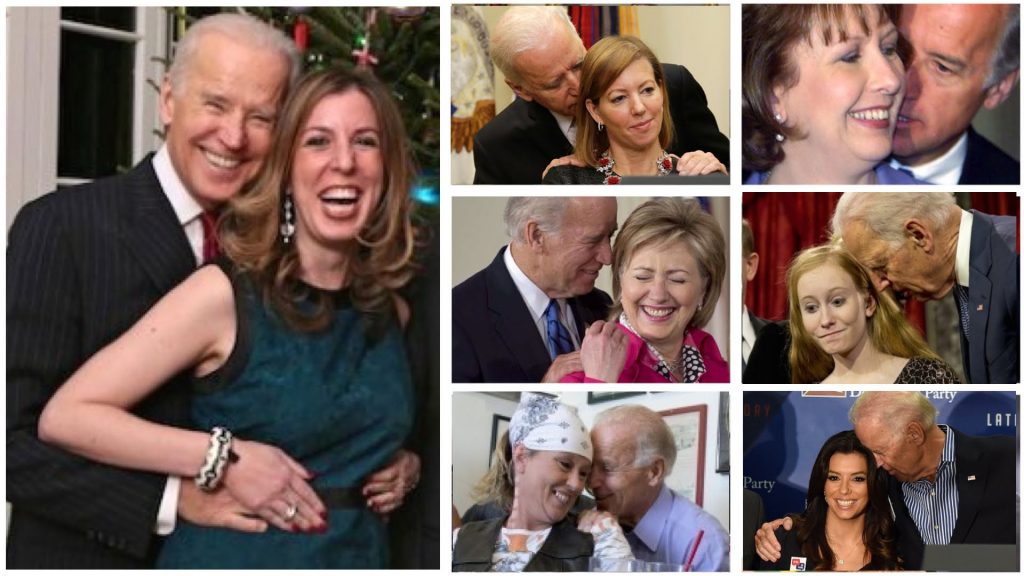 Those who wonder why the average American no longer trusts the establishment press to report fairly and accurately, or even to defend basic First Amendment freedoms, need to look no further than yesterday’s tweet by New York Times reporter Nicole Perlroth about Joe Biden’s heavily documented creepy behavior towards women, particularly younger women.

Rather than accept the idea that the man has a problem, Perlroth wants Twitter to “handle” this “alt-right fake-news meme.”

Perlroth’s beat at the Times primarily involves cybersecurity. But two weeks ago, she was involved as a contributor to the paper’s attempt to cover “fake news” in a story about how at Facebook, there is “Hand-Wringing Over a Fix for Fake Content.”

Most of the story revolves around alleged Russian attempts to influence the 2016 election through ad purchases and “promoted posts.”

But later in the story, readers see that attempts to limit the influence of so-called “fake content” have raised a concern that they “could have effects on other publications and content makers that are not spreading false or divisive news.”

It is become quite clear that the Times, which intends to influence how the social media titans handle news content, with the obvious goal being to elevate theirs and marginalize others’, has a twisted definition of “false news,” or fake news. Their definition: Regardless of how factual a news item is, it’s “fake” if it promotes viewpoints we don’t agree with, which, because they are disagreeable, are by default “divisive,” and therefore do not deserve widespread visibility.

Those who think that this is an exaggeration should consider that the paper, as I noted in a Tuesday NewsBusters post, gave op-ed space last Friday to Rossalyn Warren, “a journalist who regularly covers women’s rights and internet culture,” to openly lobby Facebook to censor “Anti-Abortion Fake News.” Warren failed to cite a single valid example of prolife websites creating “fake news,” making it clear to any objective reader that what she really wants is, in my words, “to marginalize legitimate pro-life content.”

Giving op-ed space to an aggressive advocate of viewpoint censorship is bad enough, but now we have Perlroth, an actual Times reporter, openly advocating the suppression of factual content she doesn’t like, and expecting that Twitter will fulfill its assigned duty to “handle” it as “fake news” (HT Instapundit): 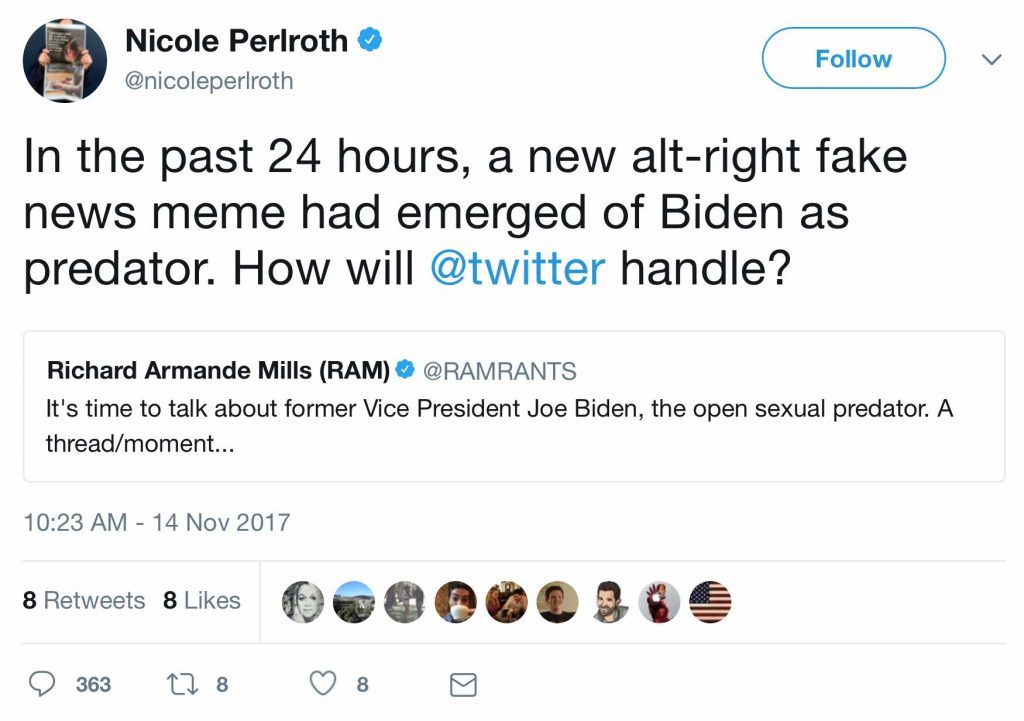 “Creepy Joe” may currently be a meme, but it has voluminous basis in documented, videotaped fact.

As seen above, Perlroth took particular exception to a compilation of Biden’s creepiness that Richard Armane Mills posted in a series of Monday tweets.

Perlroth acts as if Creepy Joe is an invention of the “alt-right.” It’s incomprehensible how a New York Times reporter who has been with the paper since 2011 could possibly hold such a paranoid belief. But, perhaps because the Times itself has from all appearances never recognized the Creepy Joe phenomenon, she does.

Unfortunately for Perlroth, over the past three years, Creepy Joe’s moves have made it into items at NBC, the Washington Post, and many other establishment press outlets. In early 2015, the decidedly left-leaning Talking Points Memo asked “Why Does Creepy Uncle Joe Biden Get A Pass From Liberals?”

Words seen at the link with the Daily Show video summarized Stewart’s outlook at the time:

Biden isn’t a bad guy—in fact, he’s downright progressive on women’s issues and a champion for equality. And if he is a perv, well, at least he’s bad at hiding it.

Perhaps Perlroth knows that Stewart’s viewpoint won’t fly in the Harvey Weinstein era, so she wants Twitter to suppress evidence of Biden’s demonstrated track record of creepiness. How thoroughly 1984 of her.

So has Facebook, where former employees admitted that they “routinely suppressed news stories of interest to conservative readers from the social network’s influential ‘trending’ news section.”

And for that matter, so has YouTube, which in August announced that videos containing “controversial” content “won’t be recommended, won’t be monetized, and won’t have key features including comments, suggested videos, and likes.” Subsequent actions against the likes of Prager University demonstrate that YouTube’s definition of “controversial” really means “conservative.”

Thus, given their track records and leftist leanings, it’s not unreasonable to believe that these three unaccountable behemoths will in some cases agree with views expressed in the Times as to what should and should not be considered “fake news.”