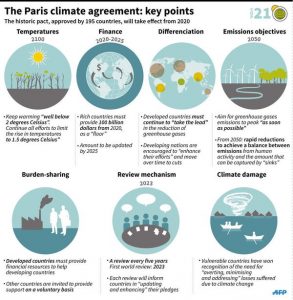 President Trump is expected to exit the Paris Climate Deal, which has been expected since he did not agree with it from the beginning. Leaving the Paris Climate Deal will keep the United States from spending hundreds of millions of dollars to finance it. The U.S. is a developed nation they are expect to foot a large portion of the bill. By leaving, the U.S. will stay away from the monitoring and reporting of carbon emissions, which would be legally binding since it would be part of the U.S. justice system.

Before conclusions are made, this is not meant for denying that human activity has had an impact on the climate and some of earth’s processes. The point here is not to deny climate change and say humans cannot change the climate but to look at the impact the Paris climate deal would have on the United States.

The issue with the goals of the Paris deal is that it lacks the hard-scientific evidence that the efforts will make a difference. It’s obvious that cutting carbon emissions would improve air quality and quality of life but this will come at a cost. The path to meeting the goal of zero emissions by 2050 would be created with constant regulations. The cost that regulations that would land on consumers would outweigh the unproven goals of the Paris deal.

The regulations that would be needed to achieve the zero-emission goal by 2050 would be accompanied by reporting of emissions. To collect data for the emissions report would add to business and government cost because it would require personnel and capital to create the report. The increased cost, again, would fall onto consumers and would increase the cost of living.

Beyond the cost to create the report, businesses would need to use capital to change methods of production so they are able to meet the emission limits of the Paris deal. This could be a major issue for businesses because the rules are “flexible” and “can adapt”, which means the changes they made could constantly need updating. Businesses would be forced to make these changes or face legal action because accepting the Paris deal would include amending it.

With President Trump expecting to leave the Paris climate deal this week, it is expected that it will create questions and scrutiny over the decision. The impact the deal would have on the United States and lack of facts supporting the goals shows that it would not be in the United States best interest to accept the deal. There are other possibilities that could put the U.S. on the same path as the Paris deal and would take in account for the impacts it would have on the country. It does not seem that Trump has too many ideas for lowering emissions but it will be interesting to see if anything comes, following his expected decision this week.