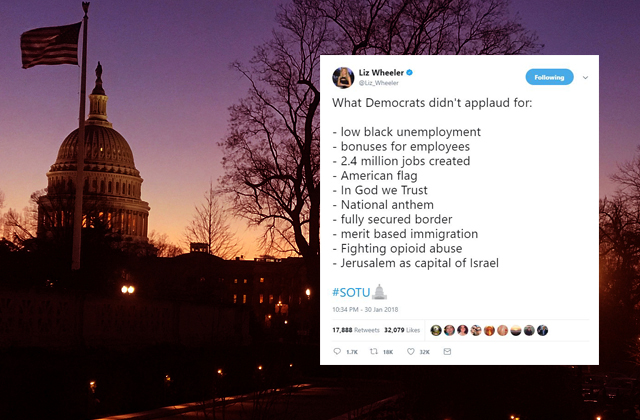 President Donald J. Trump delivered his first State of the Union address Tuesday with his most Reaganesque rhetoric to date, but also in his own showman’s touch.

As much as the Americans watching the president enjoyed the president’s speech, Political Twitter noticed that the Democrats in the room where it happened were not having a good time.

Nancy Pelosi played with her dentures again and didn't applauding when Trump called for unity between the two parties at #SOTU pic.twitter.com/9J3WcRBuLu

It got so hot that the hashtag #PelosiFrowns was trending.

Shameful to see #Demonrats with sour, scowling faces during the #StateOfTheUnion address while sitting on their hands.
Their abominable behavior shows disdain for America
How can they not clap for our flag, our military & securing our borders to keep our citizens safe? pic.twitter.com/KpbaVzdgrf

Hahahahaha #PelosiFace #PelosiFrowns are actual hashtags today 🤣😂 I personally feel #bitchface is quite suitable for this creepy crawler. https://t.co/P9CXEGIW8q

even calls for bipartisanship by Trump have Pelosi and Hoyer seated.

House Dems wouldn't even clap, let alone stand, when Trump talked about a path to citizenship for 1.8 million. #SOTU

What Democrats didn't applaud for: