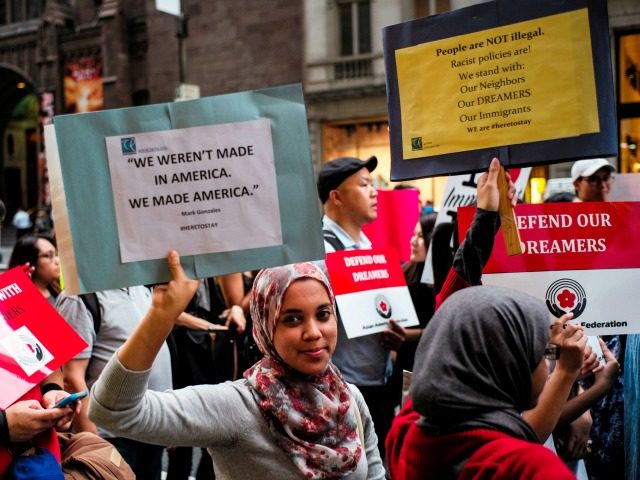 In a new poll by Morning Consult and Politico, just 29 percent of Americans said allowing illegal aliens on the Deferred Action for Childhood Arrivals (DACA) program to permanently remain in the United States and receive a pathway to citizenship was a priority.

Support for amnesty for DACA illegal aliens has dropped 10 points among Americans since Attorney General Jeff Sessions announced in September on behalf of President Trump’s administration that the Obama-era program would ultimately be ended in March 2018.

Even among Americans who are Democrats, support for an amnesty for DACA illegal aliens has fallen to less than 50 percent. Only 44 percent of Democratic voters said giving amnesty to DACAs needed to be a priority for Congress.

Months ago, though, 53 percent of Democrats said DACA amnesty was a priority.

Meanwhile, Americans who openly oppose an amnesty for DACA illegal aliens is at 15 percent.

Despite little support for amnesty for illegal aliens, Democrats, the Republican establishment, the cheap labor industry, big business and the open borders lobby have teamed up to relentlessly push for legalizing up to 3.3 million illegal aliens who are on the DACA rolls or eligible for DACA.

While pushing multiple amnesty plans in the House and Senate, lawmakers — especially those in the GOP — have ignored Trump’s popular immigration principles, which include:

Unlike an amnesty for illegal aliens, many of Trump’s pro-American reforms are actually popular with the American people.

A Pulse Opinion Research poll in August, though, showed that Americans believe the second-most important aspect to stemming the flow of illegal immigration was constructing a border wall on the southern border.

Since DACA’s inception, more than 2,100 DACA recipients saw their protected status revoked for being involved in gang activity or suspected/convicted of a felony. Due to a loophole in the DACA program, more than 39,000 illegal aliens have been able to obtain Green Cards and more than 1,000 naturalized.