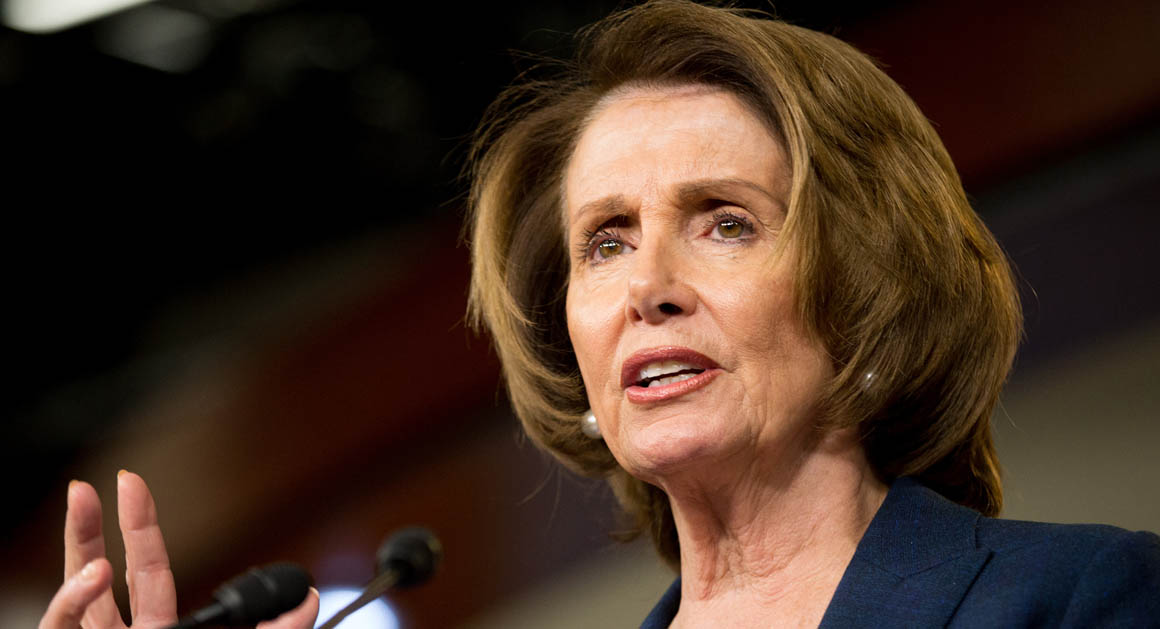 Are the sharks circling House Minority Leader Nancy Pelosi (D-CA) again?  No, she’s fine. She’ll win re-election. She’ll remain leader of the House Democrats, but that doesn’t mean that those party members trying to flip seats to retake the House are starting to view her as a problem. Alex Roarty of McClatchy noted how those who are in the business of trying to flip districts next year are not too keen to endorse the California Democrat, adding that new blood is needed in the leadership:

In a survey of 20 Democratic House candidates, only one – a former Senate staffer from Orange County, California – would state support for the congresswoman staying on as leader of the House Democratic Caucus. Of the rest, 18 declined to say if Pelosi should keep her job, while one, a political newcomer from a culturally conservative Ohio district, said he would vote for someone other than Pelosi.

Their refusal is a remarkable development for an already embattled minority leader, even if other congressional leaders, like Republicans House Speaker Paul Ryan or Senate Leader Mitch McConnell, are similarly unpopular in polls. More significant, however, are the implications that the candidates’ refusal carries for next year’s midterm elections.

We need leadership change,” New York Democratic Rep. Kathleen Rice, who has been critical of Pelosi in the past, told CNN in the aftermath of that loss. “It’s time for Nancy Pelosi to go, and the entire leadership team.”

Ossoff’s loss and Pelosi’s role in it weigh heavily on Democrats – so much so that her role as a rainmaker for candidates nationwide is no longer enough to motivate would-be lawmakers to talk about supporting the House leader.

A spokesman for Chrissy Houlahan, running in Pennsylvania’s 6th District, said “she needs to get elected first and is focused on her own race.” Andrea Ramsey, running in Kansas 3rd Congressional District, said “Kansas voters aren’t concerned about hypothetical DC insider politics.”

Most of the Democrats contacted by Roarty are running in districts that voted for Clinton, but split tickets for the congressional races. This is where the Democrats think they can have a shot at retaking the lower chamber, though there are a dozen districts where the opposite is true; voters flocked to Trump, but backed a Democrat for representative. Still, the fact that the only Democrat running in a competitive race that’s open to backing Pelosi hails from California shows the issue the party is grappling with: breaking from its coastal, salty bonds. This abortion drama for example feeds into that debate. The die-hard liberals don’t want the Democratic Congressional Campaign Committee to support pro-life Democrats, while others know it’s a way to prevent the party from being one that can only win in states that touch the ocean. Democrats’ path to the majority rests with red-leaning districts. Given the results in Georgia’s sixth congressional race, where Democrat Jon Ossoff failed to beat Republican Karen Handel, a lot of cold water has been thrown on the Left. The district was Republican, but not pro-Trump. It was the perfect bellwether. Democratic turnout was the highest in a decade, and they still couldn’t win. The New York Times’ Nate Cohn added that the Georgia result points to a scenario, where the 2018 electorate is almost a mirror image of 2016, which benefitted Republicans. Still, the anti-Pelosi haranguing is not new. Ossoff being connected to her seemed to be a motivating factor for GOP voters in GA-06. Yet, so are Hillary Clinton and Barack Obama, who don’t appear to want to step away from this game any time soon. All three will animate Republican voters, though Democrats can’t excite their base without them.

Yet, given House Democrats’ inability to retake the House in 2012, 2014, and 2016, one would think that new blood is needed. After Donald Trump beat Hillary Clinton in the presidential election, it seemed very clear that new blood and a fresh agenda was needed. Instead, they got the same old crew that keep driving the Democratic Party machine into the ditch, along with recycling Clinton’s 2016 platform and trying to make it into something new. It’s this torpor that Matt Bai wrote in June, that’s the reason Pelosi and anyone else in her generation should go unless you want to give Trump a second term:

Pelosi should leave the stage not because she’s controversial, but because what Democrats desperately need, more than any new branding strategy or slogan, is a turnover in talent. Which is why the rest of the party’s oldster luminaries should follow her to the exit, too.

Here’s a question for all you trivia buffs to ponder. Who do you think was the last nonincumbent Democrat over 55 to win the White House? I’m not talking about Harry Truman or Lyndon Johnson, both of whom inherited the job, but someone running against a sitting president or at the end of an eight-year term.

Here’s a hint: You weren’t alive, and neither were your parents.

The answer is Woodrow Wilson, who ran so long ago that you could still be both a progressive and a white supremacist and not have everyone find that completely bizarre.

… Democrats win when they embody modernization. Liberalism triumphs only when it represents a reforming of government, rather than the mere preservation of it. Franklin Roosevelt, John Kennedy, Jimmy Carter, Bill Clinton, Barack Obama — all of them, in one way or another, offered a stark departure from the orthodoxies of the past.

… [C]ertainly you can lay some of the blame for the current stasis on younger Democrats, some of whom are good enough orators to excite the party’s base, but who have thus far failed spectacularly to offer any reformist agenda to match the moment. If you don’t have a competitive governing vision, you don’t have much to complain about.

But the bottom line is that Democrats squander their historical advantage by rallying around elders who would build a better time machine than their Republican rivals. Liberalism doesn’t need its own version of “Make America Great Again”; it needs a vision to make America new again.

A party that revolves around Pelosi and Sanders and Warren — not to mention the lingering Clintons and their entire campaign apparatus — is a party that could actually manage to deliver America, for a second time, into the clutches of Trumpism.

Trust me: No one’s worth that kind of trouble.

So far, Democrats are not deviating from that track, but it’s clear that most running in the competitive districts this year view her as a toxic asset.