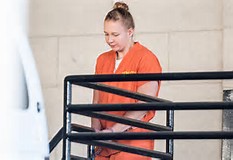 The 25-year-old accused of releasing classified information about Russia’s hacking attempts, has pleaded “not guilty” and more details on her have been released. To start, the investigation has been expanded for more documents and possible attacks she wrote about.

Reality Winner, yes that’s her name, was indicted on charges of “willful retaining and releasing national defense information.” The investigation revealed that she used a flash drive to pull the classified reports. Before she used the flash drive, she searched the web to see if they could detect a flash drive being used.

Federal agents have been considering the possibility of more files that she may have stolen. The search for other files was opened because of comments she made saying “documents” and not “document.”

This is only the beginning, agent’s located notes books at her home, which the content has created more concerns. The note books included a list of Taliban and al Qaeda leaders and the statement “I want to burn the White House down.”

The notes books and comments have forced prosecutors to search deeper into Winner and what she may be hiding. It does not help that she talked about shopping around the information to different outlets and that she was shocked the document had not been released sooner.

Winner has stood strong on her plea of not guilty but was denied bail earlier this week. Her family had pleaded for her to be released on bail and continued to say that they were still proud of her.

There is not much to be proud of when you daughter has jeopardized national security and have had thoughts of burning down the White House. Winner did not deserve bail, the investigation needs to continue and find the other stuff that she is hiding. We cannot allow for violations like this to be taken lightly and that should include the source that the report had gone to.