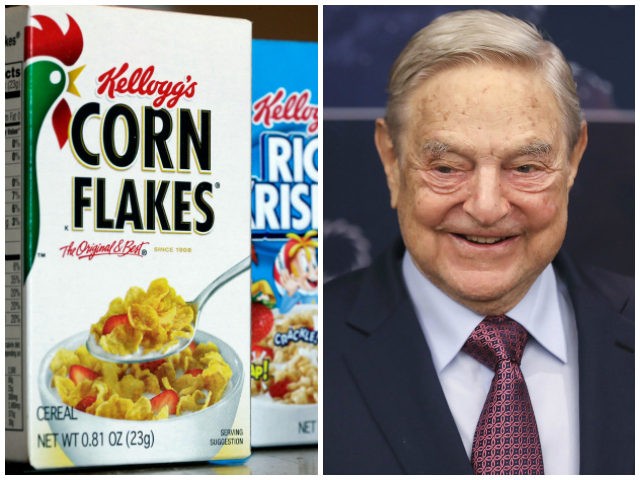 A new report reveals the shocking amount of money donated by the W.K. Kellogg Foundation to left-wing, pro-socialist organizations in coordination with the Clintons and anti-American billionaire George Soros.

The extensive report by Capital Research (CR), a conservative watchdog minding non-profit organizations, shows a long history of leftism by the foundation created by the man who founded the Michigan-based breakfast giant, Kellogg’s. It also chronicles how far the foundation has drifted from its founder’s wishes.

The W.K. Kellogg Foundation is one of the largest, left-wing donors in the country, according to the report:

The W.K. Kellogg Foundation is currently the seventh-largest philanthropy in the U.S. in terms of dollars, according to a 2016 analysis of the foundation. In 2015, the last year for which its IRS filings are available, the foundation distributed nearly 2,000 grants totaling $268,065,253. It ended the year with $448,430,564 in assets.

The Kellogg Foundation was originally founded to provide health care, healthy foods, and services for children in rural areas of the country. Its ultimate goal was to help Americans achieve self-reliance. But since the 1950s, the foundation began seriously straying from those ideals and edging toward funding anti-American socialist policies, ideals, and organizations.

Indeed, the report points out that Martin Morse Wooster wrote that Kellogg himself complained about the “Socialist trend” in politics and “could not possibly have foreseen the way his organization would be used after his death to combat ‘white privilege,’ or assist groups like ‘La Raza.’”

Sadly, W.K. Kellogg — who died in 1951 — did not lay out a concerted plan for his foundation to follow.

“The direction he gave to guide future trustees,” Wooster wrote, “was to ‘use the money as you please so long as it promotes the health, happiness, and well-being of children.’”

As CR’s Michael Volpe writes on the foundation:

It supports trendy, left-wing causes that contend America is a hopelessly racist country, along with groups that wage war on the free markets that the great capitalist Kellogg championed while alive. Kellogg would naturally approve of the foundation’s modern-day funding of hospitals, community centers, and children’s welfare organizations. But he never used his foundation to promote his politics which were apparently right of center for his times.

So, just what are some of those “trendy” left-wing causes and organizations? The report reveals a long list of them, including ties to the Clintons and anti-American billionaire George Soros.

The foundation has, for instance, donated millions to the Mexican nationalist organization, La Raza — the group founded to “reclaim” the southwestern United States for Mexico. In 2015, the foundation gave $2,400,000 to the National Council of La Raza for “general operating support.”

Some of the money given to various La Raza and similar outfits are:

Kellogg also gave $930,000 to Black Lives Matter and millions to the Clintons and Soros.

“The Center for American Progress (CAP) — the left-wing think tank started by Clinton loyalists John Podesta and Harold Ickes — has taken in more than $5 million from Kellogg since 2013,” Capital Research reported.

The report has far more to reveal, but what is above will suffice to show just how far off-track the foundation has gone.

“Since its founding, the Kellogg philanthropy has given hundreds of millions of dollars to hospitals, schools, and youth centers, especially in rural and underprivileged areas,” Capital Research concluded. “But it has strayed from the goals of its conservative founder, thus betraying what is called ‘donor intent,’ an important concept in the philanthropic community.”