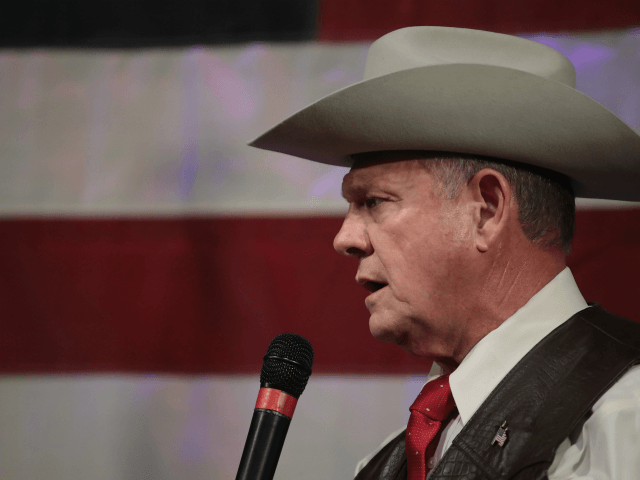 Moore slammed Congress – Republicans and Democrats alike – on the issue of the Deferred Action for Childhood Arrivals (DACA) program, which has given upwards of 800,000 illegal aliens work permits before President Trump’s administration ultimately announced plans to phase out and end the temporary amnesty program.

“I can talk to you about DACA, Deferred Action on Childhood Arrivals,” Moore said during the rally in Fairhope, Alabama. “What was that? What law was that? Why was it unlawful?”

“You see the DREAM Act didn’t pass…” Moore said. “It didn’t pass through Congress. So Janet Napolitano, director of the Homeland Security Department decides to issue a memo, a memo. And she issues a memo that ‘We’re not going to take action.’ That is her job. That was her job. They’re supposed to take action on this. But they didn’t.”

Moore went on to nail Congress for refusing to impeach then-Department of Homeland Security Director Janet Napolitano, who created DACA with the help of former President Obama, giving temporary amnesty to hundreds of thousands of illegal aliens.

“Now, you see, who’s the blame for this,” Moore asked. “The president? No, he didn’t do it. He let it be done. Congress did not stand up and impeach her for trying to violate the law. Political, that goes back to checks and balances. And if we’d go back to understanding our Constitution, we wouldn’t have the problem.”

Unlike Moore, Strange has ducked the issue, writing only on his campaign website that “It is our duty to uphold and enforce immigration law,” as Breitbart News reported.

In a recent debate with Strange, Moore announced his unequivocal support for Sen. Tom Cotton (R-AR) and Sen. David Perdue’s (R-GA) RAISE Act legislation, which would cut legal immigration in half in order to raise wages for America’s working and middle-class workers, as Breitbart News reported.

During the debate, Moore rebuked the idea that so-called ‘DREAMers,’ the term used by the open borders lobby and mainstream media to describe DACA recipients, even existed because the temporary amnesty program was enacted unlawfully by the Obama administration.

“Deferred Action on Childhood Arrivals – it’s very simple,” Moore said during the debate. “DREAMer? DREAMer development, relief, education of alien minors. There’s no such thing as a DREAMer. You know why? It was never passed by Congress. And when it didn’t pass by Congress, Obama himself, through his Homeland Security, decided to implement a program and violate the law. That’s why we’re here today. That’s why we’re having a problem today.”

Moore, backed by the leaders of populist-nationalist movement that helped elect Trump, will compete for the Senate seat against Strange on Sept. 26.