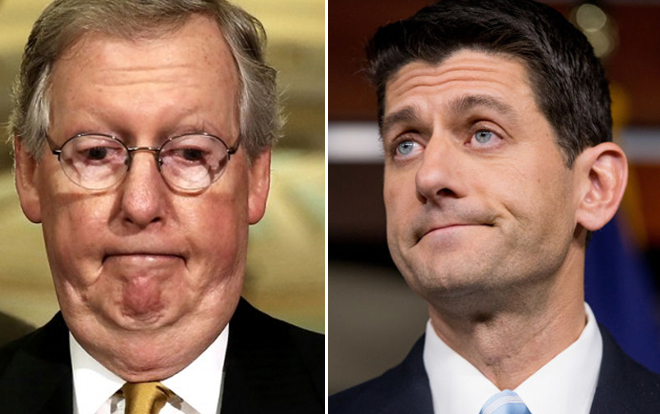 Republicans infighting between moderates and conservatives is “at the brink of breaking out into open warfare” just ahead of a critical month for Congress and Trump’s agenda.

During a rally Tuesday night, Trump threatened a government shutdown over funding for the U.S.-Mexico border wall, as tensions between Trump and Senate Majority Leader Mitch McConnell continue to escalate.

House Freedom Caucus Chairman Mark Meadows (R-N.C.), who was close to Trump during the 2016 campaign, is warning that Speaker Paul Ryan (R-Wis.) and McConnell could lose their jobs if they fall short on tax reform and funding the U.S.-Mexico border wall.

“Bottom line: if Paul Ryan and Mitch McConnell can get the president’s agenda done, they can probably keep their jobs,” Meadows said in an interview.

“If Paul Ryan and Mitch McConnell can’t get the president’s agenda done, I don’t know that they get to keep theirs, nor do I know if I get to keep mine. We’ve got to deliver. It’s critically important we do that in a way that conservatives have long espoused,” he said.
GOP leaders, meanwhile, are scrambling to deflect blame.

Ryan is highlighting the number of bills the House GOP has passed, a tacit complaint that it is the Senate where Republican legislation is dying.

The House is focused on getting the Republican agenda executed, Ryan said at a town hall event on Monday.

“I wish I could say the Senate was moving as fast. Of the 300-plus bills we passed out of the House, 260 are still sitting in the Senate,” Ryan said. “So we got a ways to go. And we’ve got to get more work done.”