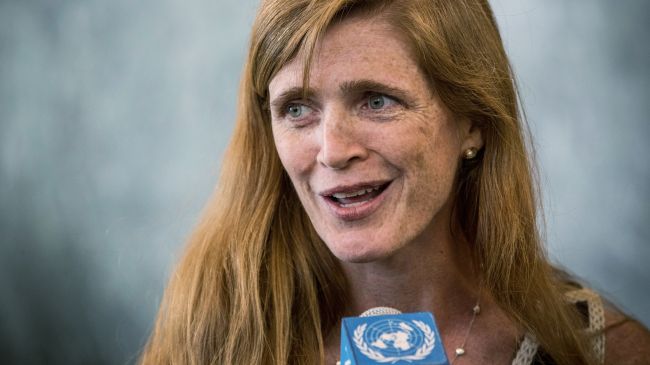 Obama’s backing for the Arab Spring, pandering to Iran and mismanagement of Iraq helped create the ISIS monster. And now Samantha Power, Obama’s UN emissary, is revising history while trying to blame Trump.

Initially on Maliki, then on Abadi in Iraq, to be bringing in the Sunnis, and to be ensuring that we’re doing away with the virus that gave rise to ISIS in the first place. Where is the respect for human rights? Where are the processes for accountability, so you can distinguish real ISIS people from ordinary Sunni who got caught up in a firefight? And it was our military in the Situation Room that was saying, “We can do our part, we can take territory. We know how to do that. We can kill bad guys; we know how to do that.” But where are the other lines of effort?

Glasser: Where is the political process?

Power: And I don’t hear anything out of this administration. John Kerry and Joe Biden were on the phone every day with Abadi, trying to get the political equation right, trying to reverse de-Baathification, all those years later after George W. Bush, so that Sunnis felt welcome, so that there wouldn’t be just more fertile soil for some future demagogue to come along and stoke people up.

Obama turned over Iraq to Iran. The withdrawal sealed the deal. Obama Inc. insisted on dealing only with the Shiite central government in Baghdad even as it repressed Sunnis.

The truly surreal moment comes here, “And I don’t hear anything out of this administration. John Kerry and Joe Biden were on the phone every day with Abadi, trying to get the political equation right, trying to reverse de-Baathification, all those years later after George W. Bush, so that Sunnis felt welcome.”

It was actually Bush who approved the Sunni Awakening. That’s what broke down ISIS. Obama cut them loose. Even after the ISIS takeover, Obama continued pandering to Iran by backing the Baghdad regime. When the Sunnis came to Washington D.C., it was Bush who reached out.

The Shia-controlled Baghdad government has ensured that weapons are funneled to Iraq’s Shia militias, many of which are under the sway of Iran and are cleansing Sunni influence in areas of eastern Iraq. The result is that, in Anbar, the Islamic State has gotten stronger, while the tribes remain weak.

The Anbar delegation that arrived in Washington on January 18 hoped to reverse this policy, arguing that the United States should bypass the Baghdad government in arming the tribes against ISIL as they had once done against al Qaeda. Doing so, they believed, would spark an Anbar “Re-Awakening.”

They arrived confident that they would be heard; after all, the Obama administration had made the fight against the Islamic State a priority and Allen had promised during meetings with Sunni tribesmen in October in Amman, Jordan, to pass their request for arms on to the Pentagon.

But as their meetings in Washington went on, their hopes started to fade…

Despite the administration’s vow to defeat ISIL, the United States places a greater priority on its nuclear negotiations with Iran, and the administration was leery of upsetting the Shiite Iranian leadership by arming the Sunni Anbar tribes. In effect, Anbar’s leaders believe, the U.S. refusal to arm Anbar’s tribes directly means turning a blind eye to Tehran’s growing influence in Iraq and Iran’s policy of arming of Iraq’s Shia militias…

But then, on the morning of January 31, the sheik received his unexpected telephone call from Bush. “I hadn’t expected to hear from the former president,” Abu Risha told me the afternoon after the phone call, “but we had a very detailed discussion. I told him what we needed, that this was a crisis.

He listened closely to what I had to say and he agreed—more people needed to hear our message.”

The sheik then recounted to me Bush’s September 2007 visit to Anbar, when the then-president met with his brother, Sheik Abdul Sattar, whose leadership had sparked the Anbar Awakening that had united the Anbar tribes in their victorious fight against al Qaeda in 2006 and early 2007.

Abdul Sattar paid a heavy price for the meeting: Just 10 days after seeing Bush, al Qaeda planted a bomb in his car, and he was killed in the explosion.

But the media will continue lapping up the same lies from the Obama echo chamber. And Obama’s Goebbels, Ben Rhodes, who boasted of manipulating the media, was there with Power. But consistently, the truth is the opposite of what Obama Inc. says it is.