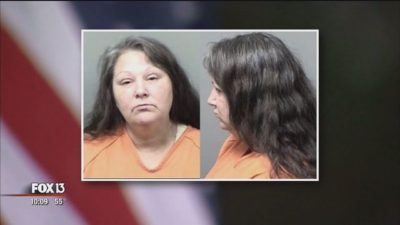 An elderly man is proving to be unflappable after his neighbor allegedly raged on him because of the American flag flying in the man’s front yard.

Lucille Blanchard, 50, of South Spice Wood Terrace, Lecanto, at 1:48 p.m. Dec. 24 on a felony charge of battery on a person over the age of 65 and a misdemeanor charge of petit theft.

According to her arrest affidavit, “Blanchard is accused (of) grabbing her 69-year-old neighbor by his shirt and pushing him backward, then stealing his American flag valued at approximately $15.”

She was reportedly “upset that her neighbor had a flag in his front yard and came over to remove it when the altercation occurred,” the paper reports.