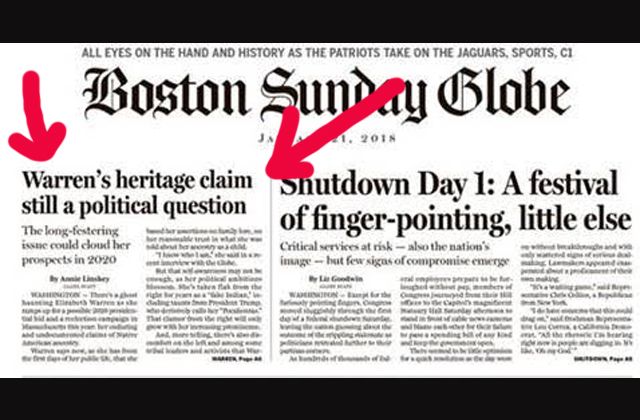 The senior senator from Massachusetts is the subject of a front-page-above-the-fold report in today’s Boston Sunday Globe that reopens the cold case of her claim to have Cherokee  heritage.

Although the Globe repeatedly endorsed and celebrated Sen. Elizabeth Warren (D.-Mass.), the paper has not shied from reporting that in 1997 Warren was called Harvard University Law School’s “first women of color,” by the school’s communications department and that for the six years Warren was a tenured professor, Harvard told the federal government in official filings that Warren as a Native American.

Warren compounded the error, when she submitted a Cherokee crabmeat recipe to the Pow Wow Chow cookbook, a 1984 collection of meals from the Five Civilized Tribes: Creek, Cherokee, Chickasaw, Choctaw and Seminole. The young law professor represented it as a traditional meal–a traditional mean with instructions exactly the same as a French chef’s own crabmeat recipe for Cold Omelets and Crab Meat.

Now, Warren is a U.S. senator and a potential candidate for president in 2020, which means this Cherokee business has to be worked out, since there is not evidence that Warren is anymore Cherokee than President Donald J. Trump.

Today’s Globe piece lays it out such:

“I know who I am,” she said in a recent interview with the Globe.

But that self-awareness may not be enough, as her political ambitions blossom. She’s taken flak from the right for years as a “fake Indian,” including taunts from President Trump, who derisively calls her “Pocahontas.’’ That clamor from the right will only grow with her increasing prominence.

And, more telling, there’s also discomfort on the left and among some tribal leaders and activists that Warren has a political blind spot when it comes to the murkiness surrounding her story of her heritage, which blew up as an issue in her victorious 2012 Massachusetts Senate race. In recent months, Daily Show host Trevor Noah mocked her for claiming Native American ancestry and the liberal website ThinkProgress published a scathing criticism of her by a Cherokee activist who said she should apologize.

As Warren is mentioned as a serious presidential contender in 2020, even some who should be her natural allies say Warren has displayed a stubborn unwillingness to address the gap between the story she was told of Native Americans in the family tree and a dearth of hard evidence to back it up.

Interesting, the reporter, Annie Linskey, writes for the paper’s Washington bureau and is best known for her willingness to write negative stories about Hillary R. Clinton, who is a fellow graduate of Wellesley College.

In March, when Linskey Tweeted that Clinton is running for president, Nick Merrill, the press secretary for the former first lady’s 2016 campaign used direct language in his reply.