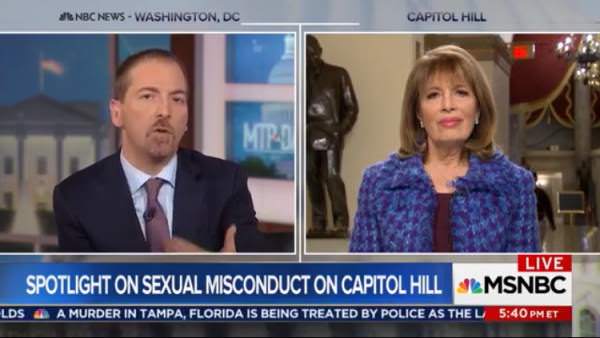 As previously reported, Congress has a rampant sexual harassment problem. In fact the problem is so bad that female lawmakers and aides keep a ‘creep list’ of men who are notorious for lewd behavior.

As if this couldn’t get any worse, Rep. Jackie Speier (D-CA) told MSNBC’s Chuck Todd Tuesday that taxpayers have paid over $15 million to settle sexual harassment lawsuits against members of Congress!

A new report by CNN exposes the DC swamp’s very serious problem of powerful men preying on women. CNN spoke with over 50 current and former lawmakers, aides and staff who have personally experienced sexual harassment on The Hill or know people who have.

Women are subjected to sexual harassment by their male colleagues and avoid reporting it out of fear of career-ending retaliation.

A female Senate staffer told CNN she had an experience with a male lawmaker in an elevator that left her horrified.

Multiple females told CNN that elevators on Capitol Hill are known places for male lawmakers to prey on women. One woman said she still gets anxiety about being in an elevator alone with a man.

Jackie Speier testified in front of the House Administration Committee Tuesday that two members of Congress that one Republican and one Democrat engaged in sexual harassment.

“I think moving forward we have got to take steps to make sure that there is transparency. That in fact, the harasser is not going to have the settlement paid for out of the U.S. Treasury and have all the taxpayers paying for it. It should be something that is paid for by the individual,” Speier said.

Chuck Todd asked if the public has a right to know who these members of Congress are being that the taxpayers have paid for their sexual harassment settlements.

“Well, I think you do have the right to know. But right now, under the system, you don’t have a right to know. We do know there is about $15 million that has been paid out by the House on behalf of harassers in the last 10 to 15 years,” Speier said.

How much more are the American people going to take from the DC swamp?! Not only do they waste taxpayer money on bloated government bureaucracy, they are also allowed to privately settle sexual harassment lawsuits with our money??

Why the hell are hardworking Americans paying for the sins of these disgusting sexual abusers?? Every single one of these Congressmen should be named and publicly shamed. They should receive ZERO benefits or pensions and must be forced to pay the settlements out of their own pockets!