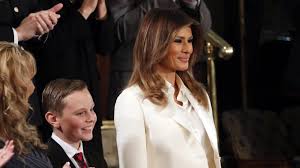 There is a lot of competition for the most inane commentary on the triumphant State of the Union Address that President Trump delivered last night.

CNN attempted a pre-emptive strike before President Trump even began speaking by speculating, as First Lady Melania Trump arrived, that her cream colored outfit was an echo of Democrats wearing white a year ago at the presidential address to a joint session, to allegedly protest President Trump’s “anti-woman” policies. This inanity was preceded by inferences that something was wrong with the First Lady arriving separately, accompanying guests, instead of riding with the President.