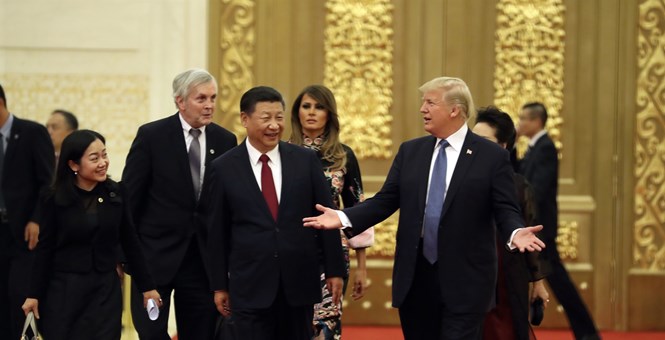 CNN straight up lied while covering President Trump’s trip to Asia. The president is currently in China, where he did not take questions from the press. The network’s White House reporter, Jeremy Diamond, tweeted, “Trump just became the first US president since George H.W. Bush to not take questions from reporters alongside his Chinese counterpart on his first visit here. Clinton, G.W. Bush & Obama all made a point of doing it.”

Asked why President Trump didn’t take questions from reporters today, Sarah Sanders said, “It was at the Chinese insistence there were no questions today.”

Trump just became the first US president since George H.W. Bush to not take questions from reporters alongside his Chinese counterpart on his first visit here. Clinton, G.W. Bush & Obama all made a point of doing it.

Correction: Obama also did not take questions with his counterpart during his first visit. He & Xi did during a subsequent trip in 2014. https://t.co/Q76KocaIiB

Yeah, you know who else didn’t take questions during his trip to China? Barack Obama—a point that Diamond, to his credit, corrected. In 2014, then-President Obama also didn’t take questions with his Chinese counterpart. So, there’s nothing to see here (again). CNN, and the rest of the elite media, also had some trouble properly reporting Trump feeding koi fish with Japanese Prime Minister Shinzo Abe during that part of the Asia trip. Trump was mocked for supposedly just dumping the food into the koi pond, but then there’s this [emphasis mine]

Democracy dies in darkness. Meanwhile, you can't even get a story about feeding fish right.

President Donald Trump took a moment out of his whirlwind Japanese trip to connect with nature and feed some fish, but after a few delicate scoops, he resorted to a grand gesture met with some laughter.

The moment happened as Trump and Japanese Prime Minister Shinzo Abe headed to lunch. The leaders were escorted to a dining room that overlooks a koi pond at Akasaka Palace.

The move got Trump some laughs, and a smile from Abe, who actually appeared to dump out his box of food ahead of Trump.

This was classic fake news. Jay Carney, Obama’s former press secretary, also jumped into the mix, tweeting “The Chinese try this every time. It’s a test of will and principle. Letting them dictate press access is an embarrassing capitulation.” The lack of self-awareness here is just stunning. I mean capitulation is par of the course for Obama’s foreign policy; the capitulation on the Iran Deal (and the ransom we paid afterwards), the capitulation to allow Assad to remain in power after he used chemical weapons, the capitulation to the Russians who we allowed to annex Crimea.