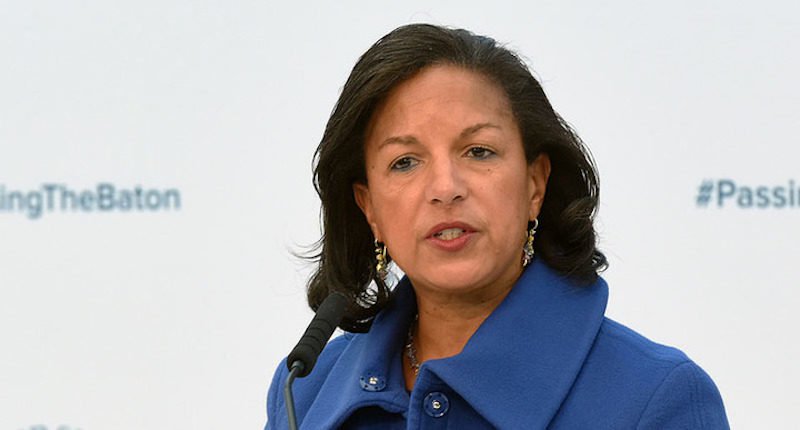 Former White House National Security Advisor Susan Rice, who has been accused of improperly unmasking members of the Trump campaign for political reasons, will not testify in front of the House Permanent Select Committee on Intelligence as scheduled today. A new date has not been determined for her testimony.

Susan Rice is no longer expected to visit Capitol Hill on Tuesday for a meeting with the House committee probing allegations she “unmasked” President Trump associates in Russian meddling probes.

Rice had been expected to face tough questions on her role in the matter while serving as then-President Barack Obama’s national security adviser. Trump alleges Rice may have committed a crime by asking government analysts to disclose the names of his associates documented in intelligence reports.

But that session has apparently been postponed.

Rice initially denied ever unmasking anyone working for the Trump campaign, specifally, those working on the transition team after Hillary Clinton lost the election.

“I know nothing about this. I was surprised to see reports from Chairman Nunes on that count today,” Rice said.

Then, she completely changed her story by admitting to unmasking while maintaining she did nothing wrong.

“We only do it to protect the American people and to do our jobs.” Rice said, adding Obama officials never used intelligence to spy on Trump officials for political purposes. “I leaked nothing to nobody and never have and never would.”