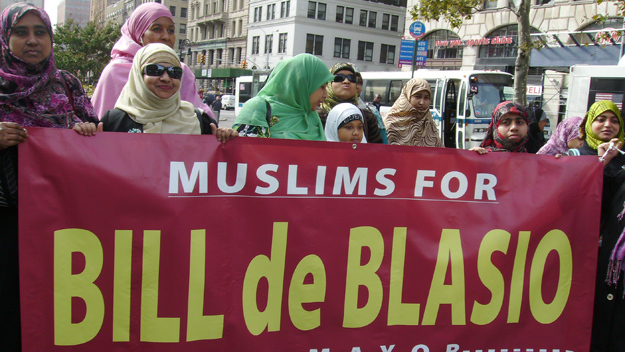 The Left and radical Islam unite once more.

The terror-linked Council on American-Islamic Relations and the city of New York have teamed to launch a far-Left “social justice” project called “AMPLIFY” (Advancing the Front Lines of Social Justice), hoping to promote awareness for the fringe issues that motivate the leftist-Islamist alliance.

Ten AMPLIFY posters will be put on display by the New York City Department of Transportation Art Program (DOT Art).

If you find yourself in #LowerManhattan now through January 2018, be sure to stop by #DOTArt display cases to view "AMPL!FY," a collaborative work by artists, designers, and non-profits concerning social justice issues. pic.twitter.com/euQZ6scic7

“You Don’t Need A Gun To Feel Powerful,” one poster reads.

“Climate Denial Is Deadly,” another says.

Excited to partner today with @morehshin and @nyc_dot to unveil the #amplify_justice public art and education installation. pic.twitter.com/0nbTkIaMuS

Since becoming mayor of the city in 2014, Bill de Blasio has worked closely with CAIR on several projects, including adding Muslim holidays as mandatory days off in the public schools system.

As Conservative Review has previously reported, the New York chapter of CAIR is one of the most aggressive advocates of Islamic radicalism. CAIR labels itself a “leading advocate for justice and mutual understanding,” but many of its current and past officials have expressed overt support for terror.

This includes former CAIR-NY board member Lamis Deek, who excitedly cheered on Islamist revolts against the “imperialist” U.S. military.

Also, current CAIR-NY board president Zead Ramadan, who frequently compares so-called “anti-Muslim rhetoric” in the U.S. to Nazi Germany’s treatment of the Jews, has pointedly refused to condemn Hamas

And Cyrus McGoldrick, a former CAIR-NY official, has come out in support of Hamas.

The Islamist-leftist AMPLIFY collaboration will go on display Jan. 7 at the Museum of Arts and Design in Manhattan.

“We hope AMPLIFY will help us educate New Yorkers who might otherwise know about the stunning surge in anti-Muslim hate crimes,” CAIR-NY legal director Albert Cahn said in a statement to the press.

“We are grateful that DOT Art is helping to use our public spaces to not only support the arts, but to engage New Yorkers in the ongoing fight for civil rights.  At a time when many hate crime victims suffer in silence, AMPLIFY can help bring a bit of visibility to their plight.”