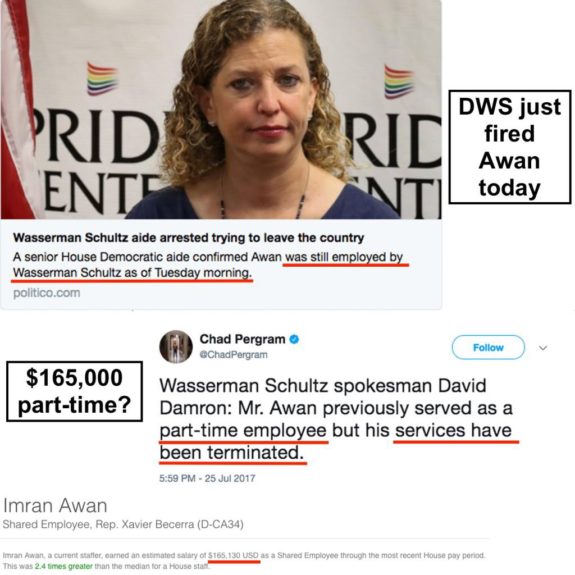 Three brothers who managed office IT for government officials were relieved of their duties in February on suspicion that they accessed specific computer networks without permission, also known as hacking.

Abid, Imran, and Jamal Awan were barred from computer networks at the House of Representatives in February.

Imran Awan was arrested on Monday night trying to flee the country with $12,000 of cash on him.

They accessed computers unauthorized. They were getting foreign information. The three brothers were making $161,000, $165,000, and $160,000.
One of the brothers has a criminal background.

** Former IT staffer Imran Awan allegedly threatened to have his stepmother’s Pakistani relatives kidnapped if she talked to U.S. law enforcement authorities,

Debbie Wasserman Shultz continued to pay Imran Awan for five months for IT services after he was banned from House computers.
Russia Today reported this in March.

The brothers, Abid, Jamal and Imran Awan, worked as shared employees for various members of the House, covering committees relating to intelligence, terrorism and cybersecurity, which included the House Committee on Foreign Affairs, the Committee on Homeland Security and the Subcommittee on Tactical Air and Land Forces of the Armed Services Committee.

Imran’s wife, Hina Alvi, and Rao Abbas, both of whom worked as House IT employees, are also under investigation.

The group were banned from accessing the computers as a result of the investigation but, as of earlier this month, Imran Awan remains as an “technology adviser” to former Democratic National Committee chair, Debbie Wasserman Schultz…

The Daily Caller reports that Imran received $1.2 million in salary since 2010, while Abid and Alvi received over $1 million each.
According to reports earlier this week Imran Awan was still employed by Wasserman Schultz after his arrest on Monday night.
David Damron, spokesman for Wasserman Schultz, told FOX News reporter Chad Pergram that Awan was terminated on Tuesday.

Wasserman Schultz spokesman David Damron: Mr. Awan previously served as a part-time employee but his services have been terminated.

Debbie Wasserman Schultz claims Imran Awan was a "part-time employee" (being paid $165k), only fired him this morning to protect herself. pic.twitter.com/sDvFRjY2lL

So why was Imran still being paid?
Wasserman Schultz has some explaining to do.