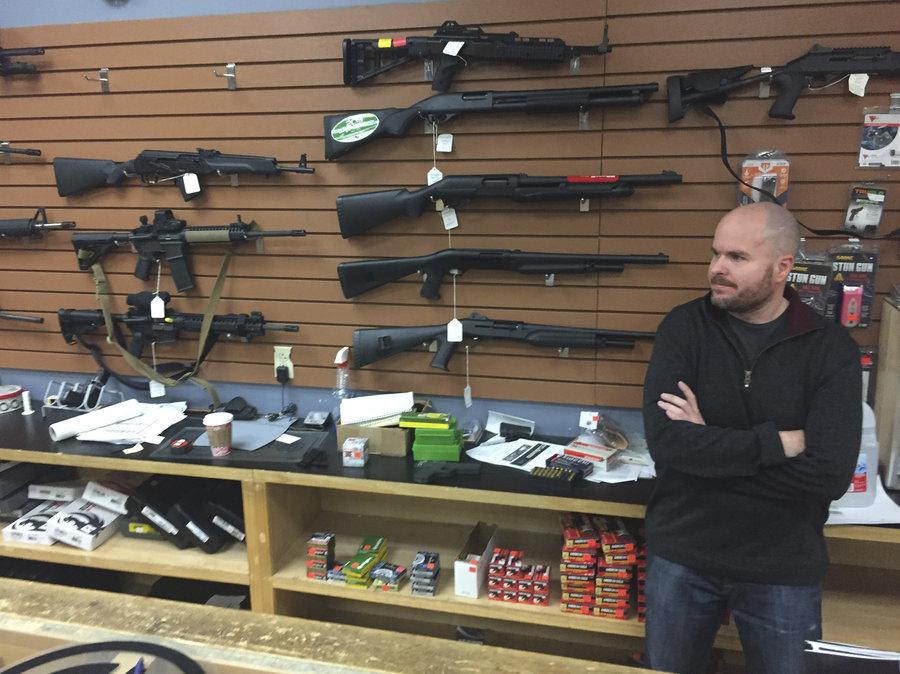 After eight years of President Barack Obama, you’d think that firearms owners—and the entire firearms industry—would be dancing with joy at the presidency of Donald Trump.

Certainly, it was great to hear the president speak up for the Second Amendment in his State of the Union address. But as I learned at this year’s SHOT—Shooting, Hunting, and Outdoor Trades—Show, which wrapped up last week in Las Vegas, it’s more complicated than that.

The SHOT Show, organized by the National Shooting Sports Foundation, the trade association for the firearms industry, is the best place to take the temperature of the world of American firearms. With 12 miles of displays and a seemingly endless crush of attendees, it’s a well-organized melee of manufacturers, importers, exporters, advocates, retailers—and, of course, firearms enthusiasts.

There’s little doubt that the majority of SHOT Show attendees prefer Trump, personally and professionally. Obama made it clear that he didn’t like the firearms business, or firearms owners, and it’s never pleasant to know that the man in the White House hates your passion and your livelihood.

But in practice, Obama was a gift to the firearms industry, as fear of what he would do drove gun sales to previously unimaginable heights and put millions of guns in American homes.

So the relief the industry felt at his departure—and Hillary Clinton’s defeat—was tempered by the reality that it would likely hurt sales, which in turn was coupled with the hope that Trump would back reforms that the firearms industry has been clamoring for.

As of today, the sales pain is a reality—but the industry’s hopes for reform have not been fulfilled. Indeed, in some respects, things are worse now than they were in 2016.

Like almost everyone else, the firearms industry was anticipating a Clinton win, in anticipation of which a lot of the industry filled its order pipeline. Now, with lots of orders placed and with sales on the wane, the industry is shaking out.

This is an old pattern in the firearms industry, which appears to be unable to kick its addiction to the sales seesaw. Back in 1994, for instance, a bump in sales—caused by President Bill Clinton’s “assault weapon ban”—was followed by a collapse over the following years.

Today, collapse is much too strong a word, but decline certainly is not.

In 2016, according to adjusted figures from the National Shooting Sports Foundation, there were 15.7 million background checks on the National Instant Criminal Background Check System (NICS), which federally-licensed firearms dealers use to determine if a prospective buyer is allowed to purchase a firearm.

By comparison, in 2017 there were only 13.96 million checks. Imports, which normally make up about a third of the market, are down almost 30 percent, year on year.

And according to a 2017 National Shooting Sports Foundation study conducted with Responsive Management, the surge of participation in shooting activities before 2014 fell back down in 2016, while hunting has continued its long-term retreat. In 1981, there were 17.5 million active hunters in the U.S., while in 2016, despite a larger population, there were only 11.5 million.

Increasingly, shooting is done on a range, by an urban, suburban, and more female constituency. Still, shooting participation overall remains higher than it was a decade ago—and those millions of new Obama gun owners are a constituency that gives the industry a higher baseline, if they can be mobilized as regular shooters and voters.

The State of Reforms

On the reforms side, the pattern is even less happy.

Like every highly regulated industry, the firearms industry has a long wish list. But none of the five items that top the list are visibly much further along now than they were a year ago.

Export control reform, of which the National Shooting Sports Foundation has been a stalwart proponent, has still not brought commercial firearms and ammunition from the purview of the State Department over to the control of the Commerce Department. And the U.S. signature is still on the Arms Trade Treaty, which remains as unworkable as it is unwise.

Legislatively, the picture is even less appealing. The Hearing Protection Act is stuck in the House. The Act would eliminate the transfer tax on firearms suppressors (which some inaccurately call “silencers”) and—in effect—remove the devices from the purview of the National Firearms Act, which is mostly for weapons such as machine guns and short-barreled shotguns. Only the U.S. places suppressors in the same class with machine guns. In most of Europe, suppressors are an off-the-shelf purchase.

The Concealed Carry Reciprocity Act, meanwhile, is stuck in the Senate. The Act would make a concealed carry license in one state effective in all the states that allow it.

Finally, there’s the Fix NICS Act, the fruit of a National Shooting Sports Foundation campaign dating back to 2013, which would make NICS more reliable by including more mental health records—and which has still not received the bipartisan push over the goal line that it deserves.

On the subject of the background check system, I’m always astonished by what I learn about firearms regulation at the SHOT Show. Today, as a result of the terrible Vegas shooting, banning “bump stocks”—which give a semi-automatic weapon the firing speed of a fully-automatic one—is the latest anti-gun silver bullet.

But yet, as attendees at a National Shooting Sports Foundation seminar on NICS were told, there are still federal departments out there that will respond to FBI queries related to NICS only if the FBI writes them an old-fashioned letter.

Federal firearms dealers are allowed to go through with a sale if NICS fails to respond within three business days, meaning that some NICS checks happen only after the fact, at which time it becomes the Bureau of Alcohol, Tobacco, Firearms, and Explosives’ (ATF) duty to recover the sold firearm.

Instead of panicking about bump stocks, perhaps Congress should require all federal agencies to make timely replies to NICS inquiries from the FBI.

What the Trump Administration Has Done

The really troubling part of the Trump administration, though, isn’t so much what it has failed to do, but what it has actively done.

In November, Attorney General Jeff Sessions released a memo forbidding the Department of Justice (in most cases) from avoiding notice and comment rule-making—a wise policy in general, but a problem for the firearms industry, which is regulated in large part by the ATF on the basis of administrative determinations.

ATF overcame that barrier—its actions are individual adjudications, and thus allowed by the Sessions memo—but not before ATF had ground to a halt for some time.

The fundamental problem, though, is the same one that has bedeviled the Trump administration throughout its tenure: a lack of appointed leadership in the federal agencies. The result has been to hand considerable power to permanent government bureaucrats, and virtually no one in the industry is happy about how that power has been used.

As Johanna Reeves, executive director of the FAIR Trade Group—the industry association of firearms importers and exporters—puts it, “Obama has more power now than when he was president.”

Throw in the fact that the most experienced and knowledgeable civil servants who once oversaw the export control process have retired or resigned, and the result is a lot of change that the industry doesn’t like.

On the ATF side, the industry is concerned that regulations to eliminate bump stocks will end up capturing all semi-automatic firearms, and they are alarmed by the prospect that ATF inspections of federal firearms licensees might start to piggy-back off the Pentagon’s much more intrusive oversight of defense contractors.

In the here and now, a series of decisions in the State Department’s Directorate of Defense Trade Controls has added to the burden of obtaining export licenses for minor parts and components and different calibers of ammunition, and—perhaps as a result—processing times have slowed. Licenses for exports to Canada used to take two to three days. They now take 10. Some licenses for exports to Europe are now taking 30 days to process.

All these changes at the State Department come at a time when, the industry hopes, the process of export control reform is crawling toward a resolution—which implies that the logical thing for State to do is to make no changes before it hands the business over to the Commerce Department.

Reportedly, the only major sticking point now between State and Commerce is State’s desire that Congress continue to be notified of all firearms exports worth more than $1 million—a sticking point that should be eminently solvable.

The advantage of export control reform for State is that it will substantially reduce the number of license applications it has to process. The advantages for the industry include the fact that quite a few foreign purchasers are unwilling to buy anything that is subject to U.S. export controls, as the compliance processes on the foreign side are as onerous as they are on the U.S. exporter.

But today, the firearms industry is in the worst of all possible worlds: State is focused on the supposed “crown jewels” (like tanks) that remain under its control, and commercial firearm exports are getting caught up in that increased scrutiny. This wasn’t how export control reform was supposed to work.

What is missing here is political and administrative leadership—leadership to finish off export control reform and to press ahead with at least a couple of the other reforms.

NICS reform should appeal even to gun-hating liberals in Congress, and Trump can unsign the Arms Trade Treaty on his own. Concealed carry reciprocity and the Hearing Protection Act may well take longer, but as the firearms industry knows all too well, eternal vigilance is the price not just of freedom, but even of modest reform.

Right now, however, weakening sales, no public steps forward, and quite a few small administrative steps back make for an unpleasant combination. It’s all well and good knowing that the man in the White House is fundamentally on your side, yet kind wishes don’t pay the bills.

In the realm of firearms, the Trump administration isn’t endearing itself to either its opponents or its supporters. It’s certainly not too late for it to do better, and as I commented earlier, 2018 could be a great year for American gun makers, sellers, and buyers. But if progress doesn’t arrive before next year’s SHOT Show, the outlook, both administratively and politically, could be a great deal darker.